Written by The Location Guide on Dec 9, 2011. Posted in Interviews

Perico works as a freelancer in the production service and locations business on the Spanish island of Mallorca. 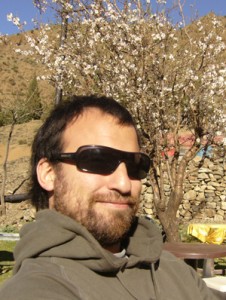 "I originally wanted to be a chef but after two years in a kitchen I decided that I'd needed to breath fresh air and not spend the rest of my life working in a cave!"

Perico went to film school in Madrid and after eight years on the Spanish mainland and in the UK he returned to his native Mallorca.

He has spent the last five years working on TVC's and photoshoots and works closely with Orange Valley Production.

Tell us about Mallorca.

You can find whatever you need. The light, the weather and a developed filming infrastructure make the island a great place to shoot.

What locations are most commonly used by film and TV crews when they film in Mallorca?

Our roads, city centres and beaches are used the most.

What are the rare, more unusual locations that our readers would not necessarily associate with the region?

People always associate Mallorca with beaches but a lot of people forget about our mountains.

Probably a shoot for David Lachapelle... I had to find a house that would let me put a car in the swimming pool and completely change the garden... as well as a number of other odd things!

90% of the production work in Mallorca is servicing and most of that is for TVCs. We have had five features this year however, including the Wachowski brother's Cloud Atlas.

It's a very easy place to shoot. You can get most permits quickly and the equipment and crew on the island are top notch.

Another advantage is its size. You can be shooting on a beautiful beach and within the hour be filming  at 1,450m on the side of a mountain.

Which are the best airports to use to film in Mallorca?

Our airport, Son Sant Joan, is a bit of a tricky place to shoot. I prefer to use the Estacion Maritima (Port Facilities). It's not as busy, which makes it easier,  but still has plenty of atmosphere.

What are the most film-crew-friendly hotels in Mallorca?

Mallorca is a very touristy island so most of the hotels are very happy to have film crews if they have rooms available.

For wrap parties you have lots of places to go depending on the season or the kind of party.

What do you do when you have time off and what would you recommend film crew and cast to do to relax?

I like to dive and go fishing. Mallorca is a great place for trekking, cycling, sea sports and of course for relaxing!

If you had not been a location professional what would you have done instead?