Written by Murray Ashton on Dec 22, 2011. Posted in Interviews

Shooting Salta was established in 2009 by Rodrigo Moscoso, Alejandro Gallo Bermudez and Rodrigo Saravia who decided to return to their native city of Salta after spending ten years working in major production companies in Buenos Aires. 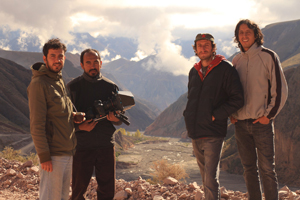 Tell me about Northern Argentina.

The main characteristic of northern Argentina, and especially the province of Salta, is its great variety of landscapes and climates separated by only a few kilometres. There are rainforests, spectacular deserts, green valleys surrounded by amazing rock formations, salt flats, volcanoes, colonial cities and pre-Columbian towns nestled between the mountains.

It's really a very special environment that's worth exploring.

One of the most popular destinations is the spectacular Quebrada de Las Conchas with its stunning mountains. It offers amazing shapes and shades of red. Another highly sought-after location is Salinas Grandes, an incredible salt flat surrounded by mountains where several movies, such as Gus Van Sant's Gerry, have been filmed. The villages of the Puna are also popular. Iruya was used by Guiness for their famous Domino commercial (below).

For a commercial for the juice brand Tropicana. We were asked to look for a mighty river surrounded by green mountains, which is not actually a problem in this area. But this happened in July, which is the dry season in northern Argentina. After a long search we found the Jurament River, which met our requirements but the flow of the river was not enough. The river was regulated by a dam so we had to ask permission to open the gates during the shoot. Fortunately it all worked out!

We mainly provide production services for commercials, both for companies from Buenos Aires and from abroad. We've worked on commercials for companies such as Coca Cola, Movistar, Tropicana and Personal.

In addition to the spectacular scenery there are very good film technicians, which lowers production costs.

We've also worked on several feature films, including Sin, an Argentine-Spanish co-production directed by Diego Yaker, and The Beauty, directed by Daniela Seggiaro.

TV work is also important to us. It's mostly for national television but we also work for channels like Playboy TV.

In addition to the spectacular scenery there are very good film technicians, which lowers production costs as there is no need to bring technicians from abroad or from Buenos Aires.

Perhaps the biggest drawback to filming in the north is the lack of professional equipment for big productions. You will need to bring it up from Buenos Aires, which is about 1,500 kilometres away.

The best airport in the north of Argentina is Salta’s Airport because of its flight frequency and its position in the middle of the region. There are nine daily flights from Buenos Aires. The companies that fly to Salta are Aerolineas Argentinas, LAN, TAM and Líneas Aéreas Andes.

All of them! Salta is a very important tourist destination in Argentina so there are hotels for all tastes. Shooting Salta has several agreements for film crews with hotels such as the Sheraton.

When we have free time, we like to enjoy family life and cultural activities in the city of Salta. For relaxation, we recommend Cafayate, the quintessential wine region of northern Argentina, where you can enjoy exclusive wines of the region such as Torrontes white wine, which is quite unique.