Written by Murray Ashton on Dec 1, 2011. Posted in Interviews

After 14 years of teaching infant school children, Natalie decided she needed a total change of scene and went to work as a Production Co-ordinator for a Brisbane production company owned by her brother.  "My work with him involved a fair bit of location scouting. During my first foray into locations I noticed that a great Location Manager needs everything a great teacher needs – a keen and creative eye, a strong rapport with people, the ability to build trust, strong organisational skills and the ability to take many factors into consideration." 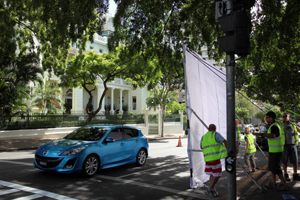 Before long Natalie had decided that making film locations her career would be worth a try; that was seven years ago.

"I dabbled briefly in long-form but the allure of TVCs convinced me that that’s where I most like to play. TVCs offer great budgets, short timeframes, quick decision-making and a playground for creatives to try out ideas but be handsomely rewarded (unlike low-budget long-form projects)."

Natalie's location work is based on a very strong database of locations, which is specifically attractive to TVC makers.

"The advertising world needs locations now, and they need them fast.  This is where my database comes to the fore."

Other TVC Location Managers will agree with me when I say that it’s often the simplest location that offers the greatest challenges.

Tell me about Queensland.

My locations company is called Queensland Film Locations. I laugh to myself about my company name because Queensland is such an enormous state and I am really only confident with the south-east corner. Any enquiries for the far north I pass on to expert LMs up there. Queensland is a tropical and semi-tropical state of Australia.  This means we can offer mega-city scenes, dry rural countryside, mountainous terrain, suburbia and urban grit, white sandy beaches, tropical rainforests and glitzy city beaches.

Firstly, many film companies come to the big cities of Brisbane and the Gold Coast. Here they have an array of amazing locations and highly skilled crew, as well as state-of-the-art equipment.  The other big draw is that Queensland offers a tropical north that has rainforest and world-class beaches and islands in and around The Great Barrier Reef.

We have quite a few war relics like gun turrets on beaches and forts. We have arid, desert-like terrain that is bleak and formidable.

Production companies are spoilt for choice when it comes to accommodation and production office space.

Other TVC Location Managers will agree with me when I say that it’s often the simplest location that offers the greatest challenges. When an agency or director cannot or will not deviate from the brief and insists on all ten boxes being ticked, it gets impossible. For example, I’m currently scouting for a location that is a backyard BBQ scene – the backyard can’t look Queensland, so no Queensland architecture, no palms or sub-tropical foliage, but it must be leafy and well maintained, although not too well-manicured. The yard has to be big enough to accommodate a dolly track and look like a yard in Sydney or Melbourne. Finally, it can’t have a wire fence but must have a white picket fence. The house has to be low-set. The house has to look like a first home-owner. Yes, I can hear TVC location owners laughing as they read this!

On this particular job I’m the third Location Manager to do a file pull, so they’ve received about 45 homes to match the brief. The director’s response has been “Hmmm, have you got anything else?” 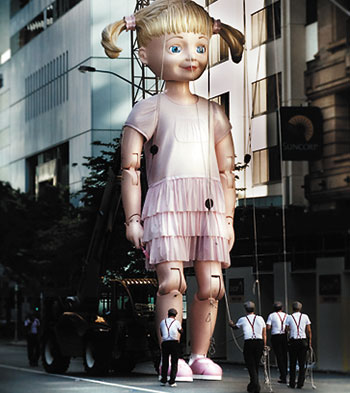 My proudest work is car commercials and I've loved working with Holden and Mazda.

We have very hot summers. During this time everything is very green and abundant. Many Korean, Japanese, German and Russian production companies film here during this time to make the most of this weather while the northern hemisphere freezes over. We have afternoon storms in summer but these can be predicted and worked around. Our winters are amazing! Clear blue skies, 22 Degrees Celsius and no rain. This weather makes for a very happy, optimistic crew. Queensland crews work a ten-hour day, as opposed to all other crew in Australia. We are hard workers and love winning jobs over the Southerners.

We have an international airport in Brisbane. Some flights also fly into the Gold Coast.

Brisbane production companies are usually covered by a Public Liability Cover of up to AUSD20 million.

In my spare time I travel and work on my website www.precinkt.com, which combines my love of 'finding great places' with travel and café culture.

In Queensland cast and crew should make sure they visit Tangalooma Island to feed the dolphins, watch whales and go sand tobogganing on the world’s largest sand dunes. Our beaches are the best in the world (no argument) so crews should allow plenty of time to just hang out at the beach. We have world class restaurants, night clubs and coffee. You wouldn’t be anywhere else!