Written by Murray Ashton on Dec 15, 2011. Posted in Interviews

Filming in Wales with Penny Skuse

Penny got to know South Wales while studying at Newport Film School. After stumbling around in film and television for a few years as a freelancer she eventually became aware of film commissions and their work.

"I got my foot in the door by volunteering at the Bristol office of the South West Film Commission and convinced them to give me a permanent job; eventually I ended up running the office."

When the opportunity of starting a brand new regional office of the Wales Screen Commission arose, she jumped at the chance.

"We began in October 2002 and we had literally nothing on the database. We were even offering up our own houses for filming."

The commission now has three offices in Wales and I cover the south region, which stretches from Monmouthshire in the east over to Pembrokeshire in the west. We are lucky to have a very diverse landscape incorporating historic castles, industrial areas, hills and valleys, old mining towns and villages, rolling countryside, stunning coastline and picturesque towns and villages.

One of the most interesting sites that we’ve recently registered is the disused part of a large air base in St Athan.

The crew and equipment base tends to be concentrated around the Cardiff area and we also have Dragon Studios near Bridgend which has hosted productions like Ironclad, Merlin and Upstairs Downstairs. Dragon DI are also based close to the studios and are the world’s only dedicated DI facility, specialising in the delivery of a class-leading service for digital intermediate and restoration. 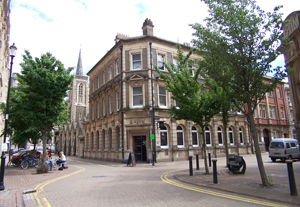 Mount Stuart Square (left) in Cardiff Bay tends to stand in for London quite a bit. There are a number of impressive 19th Century buildings and in the centre of the square is the magnificent Coal Exchange, which these days is used as an arts and entertainment venue.

Doctor Who, Torchwood, Sherlock and Upstairs Downstairs have all used this square in the past, as traffic can be easily controlled or diverted.

As for the feature films, they tend to use the more epic landscapes of the Brecon Beacons and the coast of Pembrokeshire, which always look magnificent on the big screen.

What are the more unusual locations not necessarily associated with your region?

One of the most interesting sites that we’ve recently registered is the disused part of a large air base in St Athan (pictured below). There are numerous empty aircraft hangars, as well as offices, a canteen and plant rooms, plus huge areas of tarmac which can be used as car parks and roads. It has been used recently by Torchwood, Doctor Who, The Killer Elite and Mr Nice.

I wouldn’t like to name names but there was a low-budget feature film that shot here a few years ago that was a complete nightmare from start to finish. The crew were very inexperienced and caused all sorts of problems when it came to using locations without the proper permissions.

The production was in such disarray they didn't have a finalised list of locations until a few days before the shoot and even then the list changed during filming.

We work on everything from large-scale feature films to no-budget short films and everything in between. We do find that we work on television drama the most, mainly because there are so many based in South Wales now. The new BBC Drama Village in Roath Basin means that there is always something going on in Cardiff.

We had Snow White and the Huntsman over in West Wales in September. They used Marloes Sands in Pembrokeshire (below), which is an absolutely gorgeous stretch of coastline.

Further details on the productions that have recently shot in South Wales:

There aren’t any filming permits required to shoot in Wales, but we always put people in touch with the relevant local authority or council. The main crew and facility base is around Cardiff, as the majority of productions shoot in and around the capital city.

We’re lucky in South Wales to have a diverse range of hotels from 5-star luxury to the more budget-conscious.

Productions such as Doctor Who and Casualty don’t usually like to travel too far from the studio to keep costs down, which is lucky as we have an extraordinary variety of locations within an hour’s drive of Cardiff. 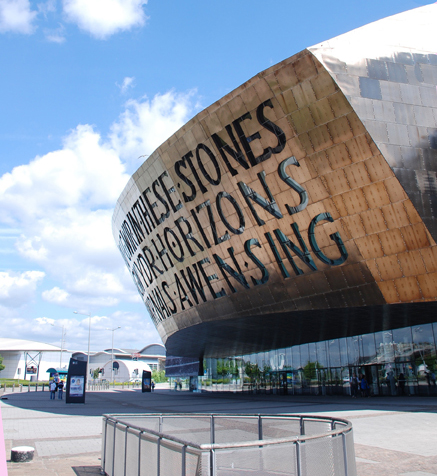 We’re lucky in South Wales to have a diverse range of hotels from the 5-star luxury of the Celtic Manor, the St David’s Hotel & Spa and the Hilton through to the more budget-conscious Travelodge, Ibis and Premier Inn.

We’ve heard great things about the Park Plaza Hotel in Cardiff city centre from a number of different productions that have been impressed with the quality of service there.

My personal favourite wrap party venue would have to be the Millennium Centre in Cardiff Bay (pictured right and in the background below during a Torchwood shoot), which has some great function spaces and is conveniently located so that I can walk home easily after a few drinks!

It would depend on what and where they are filming and the size of the unit. For a basic film shoot Cardiff Council looks at GBP5 million as minimum public liability cover. Location costs vary a great deal depending on the type of production but Cadw (the Welsh Government’s historic environment service) has published its filming fees on its website and they start from GBP220 per half-day.

What do you do with your time off?

I have always been interested in photography and it’s great to be able to combine this interest with my work, being able to get out and about taking photographs of the stunning locations that surround us, especially along the coast.

I’m a bit of a rock chick at heart so I enjoy going to concerts and of course I try to get to the local cinema as much as possible.

As a bit of a foodie, I love to visit the farmers' markets and food festivals that crop up on a regular basis. I live in Cardiff Bay so I’m slightly spoiled for choice when it comes to the array of restaurants, bars and theatrical productions or concerts at the Millennium Centre.