Written by Murray Ashton on Dec 23, 2011. Posted in Interviews

Philip started his working life in Queenstown as a ski bum, thinking it was a worthwhile alternative to further education. Eventually, after a very late and short stint at university, he got a job as (an older) PA on a Japanese TVC. 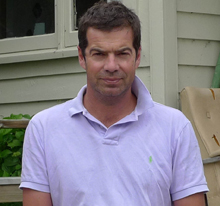 "It was quite different to anything I had done in the past - chaotic and interesting at the same time - and you got paid to eat the most delicious food I had ever seen outside a good restaurant (NZ film caterers are legendary)."

Philip decided the locations department was for him.

"In theory I would be able to utilise existing skills and take photographs, something I had loved doing as a kid. Roughly 15 years later here I am, still trying to ski, ride a bike or roam the countryside with camera in hand."

Tell me about the South Island.

I am based in Queenstown in the lower South Island. It's generally regarded as one the most beautiful places in the world so a large portion of my work is within three or four hours of home. New Zealand (roughly the size of Colarado) is blessed with an incredibly diverse landscape. This is particularly the case in the South Island. Relatively short travel will provide an incredible variety of unspoilt landscapes – the world in one country as someone once said.

I have also been lucky enough to work in a number of other countries and don’t mind hopping on a plane to anywhere.

A large chunk of the work here is replicating landscapes from the Northern Hemisphere in the opposite season.

Queenstown is the main staging point for filming in the South Island. The crew and equipment infrastructure is world-class. Local crew specialise in working in difficult locations and thrive on the challenges this provides.

Post-production facilities are well catered-for in the cities of Wellington and Auckland (short flights from Queenstown).

The South Island has a great film office, which has been very pro-active in furthering relationships with organisations outside the industry. I can say with confidence there is a very welcoming approach to filmmaking here.

A large chunk of the work here is replicating landscapes from the Northern Hemisphere in the opposite season. Timing for seasonal requirements is of course crucial. Autumnal leaves don’t last forever.

...Hmm, you have me stumped there.  That request must be still coming!

Trying to find the locations that don’t exist. Sometimes it just isn’t there, or rather here! Possibly the greatest challenge is finding the perfect place and discovering the owner doesn’t want you.

New Zealand is regarded as one of the safest places in the world to work – but we still have rules.

My work is a mixture of TVCs, stills and the occasional film.

The area has played host to a number of large features over the years – The Lord of the Rings trilogy, 10,000 BC, X-Men Origins: Wolverine, The Lion, the Witch and the Wardrobe to name just a few. The Hobbit is here now.

There is also a constant flow of TVCs produced in the area. The local industry has been built on TVCs - it's a great environment to build a broad and talented skill base.

We don’t have any scary animals, although West Coast Sandflies can punch above their weight. The weather is very good - being a few islands in the middle of the Southern Ocean means bad weather doesn’t last long.

New Zealand is regarded as one of the safest places in the world to work – but we still have rules. These provide a safe, straightforward environment to produce quality imagery. A good production company will put things in place and ensure your trip is successful and fun.

Which are the best airports to use to film and who flies there?

Queenstown has an excellent airport. It’s been rebuilt about six times as it constantly outgrows itself. It receives daily direct flights from Australia, as well as plenty of flights from Auckland and Christchurch (New Zealand’s main international airports).

All film production requires Public Liability Insurance to cover those 'what ifs?'.

Freight and customs are easily facilitated via a New Zealand film production company.

Queenstown is a resort town so there are numerous options, from the reasonably-priced to very exclusive luxury lodges.

My favourite wrap bar is The Bunker; super cool, it’s where James Bond would have his Martini shaken...

Chauffeur my daughter around and try to embarrass her whenever possible (very easy with a 13-year-old). I also have a new road bike that needs to be ridden.

Queenstown is one giant playground. Some people seem to struggle to find time to work. There is plenty of the bone-breaking hardcore stuff or a good number of more leisurely pursuits; we produce very very good Pinot Noir.

The whole country is a wonderful place that loves visitors and that goes beyond rugby! We are still patting each other on the back for that one.