Written by Justin Bird on Dec 6, 2011. Posted in Contributors

If the world were a city it would be called Rio de Janeiro. Beauty sits nestled in tragic poverty. Immense wealth, ugliness, huge urban sprawl and spectacular rural expanses are close neighbours.It is a city of contrasts unlike any other. Touching at the heart of what attracts so many people to Rio is probably that one definition. You can see the past, the present and the future of your own life mirrored in some aspect of this city. You can feel at home, or you can feel completely alienated. But it is never less than fascinating.

Two hours north-east of Rio lies Arraial do Cabo. It is a small paradise of white sand beaches, turquoise ocean waters, desert dunes and some of the best diving in Brazil. The constant clarity and colour of the water is due to the underwater current that arrives directly from the Falkland Islands. It is a phenomenon known as up-welling.

Anyone who has truly experienced Brazil knows that it is a bit like a giant dog chasing its own tale.

Cold currents are carried in a stream over hundreds of miles and, upon meeting the warm Brazilian current, surface here in Arraial do Cabo. Two hours south of Rio is Angra dos Reis; 365 tropical islands are scattered amongst the bays and coastline of lush jungles and waterfalls. One hour north of Rio are the mountains of Teresopolis, Petropolis and Novo Friburgo. Roads circle around huge mountain peaks. Forests, rivers and waterfalls split the valleys. Early settlers were from Austria, Switzerland, Norway and Finland. The hotel Sao Moritz is an immaculate replica of Swiss chalets located on the road between Teresopolis and Novo Friburgo. 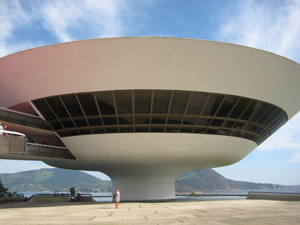 The city of Rio de Janeiro is at the centre of this amazing contrast of landscapes. Yet its biggest claims to fame are the beaches of Copacabana, Ipanema, Carnival, samba and, of course, football. All within the shadow of the huge statue of Christ, perched on the mountaintop of Corcovado, his arms held wide, embracing all that lie below.

Anyone who has truly experienced Brazil knows that it is a bit like a giant dog chasing its own tale. Rio is no exception. The problems have solutions and the solutions have problems, which have solutions. And within that structure there are chaotic smiles and happy tolerance.

Brazilian patience is virtually impossible to define. It is part of what makes them appealing. ‘Jeitinho’ is the famous way of getting anything done. “Vou dar um jeitinho” means literally “I’ll find a way”. It is a way of life that is the structure of the unstructured. As you look out over the steep granite hills shrouded in ocean mist, across the wide open bays, the endless beaches, the city skyscrapers, the historic buildings, the urban forest, the favelas – it strikes you as an endless mix of chaotic, yet unique beauty. No wonder they call this the Marvelous City.

Rio is hot, sensual and scintillating. Neighbourhoods like Lapa and Catete are deliciously seedy. Copacabana is crowded and touristy. Ipanema is chic and respectable. Santa Teresa is bohemian artist mansions. Leblon is elite, while Barra de Tijuca is Miami.

In between are the forgotten souls. The driving heartbeat of the city known as favelas. “The unfortunate are born over there,” people say. There are no walls of separation but the barriers are greater than any brick wall. Poverty is a curse. When it spreads beyond control it is a moral disgrace. Decency is a human right and without decency there is no respect for humanity.

They are being salvaged from the wreck of humanity that makes up these neighbourhoods.

Some time ago I visited a school in one of these regions of Rio. Four hundred children crammed into an area the size of a regular house in any respectable country. These children are the cast-offs. They have lost parents and brothers. They live amongst drug-dealing, gun-wielding illiterates. The local public school system has branded them as un-teachable. Yet in little more than a few months these young beings aged between five and 16 years of age are being taught to connect thoughts, to maintain and train their memory.

They are being salvaged from the wreck of humanity that makes up these neighbourhoods. This small school was founded and is run by Ivonne Bezerra de Mello, who is a driving force for human rights in Brazil.

She has created a very simple solution to a very complicated problem. Education. Learning to think. Imagine that! It is an amazing and heartwarming process. This story, amongst many others, forms the basis of “Cade O Dinheiro”, a documentary that Utopia Films is producing, using Rio de Janeiro as the model of the world within a city. Literally translated it means “Where’s the Money?” It is a question that occurred to me while driving through a residential area of upscale Rio. I stared all around wondering who could afford to live there. The hills, just above the luxury apartment buildings, were lined with slum houses. It illustrated perfectly the contrast that is Brazil.

Rio is sexiness, it is religion, prostitution; it is nuns on bikes.

In addition to developing local projects, Utopia Films stays busy servicing international productions from around the world. Dream Hotel for Austria/Germany, Panasonic for Dentsu, Japan, TENA for directors Blinkk and the agency DLKW Lowe in the UK, Fear Factor for Endemol and Mastercard for Canada are just a few of our recent projects. 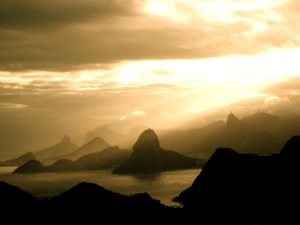 In the world of the unstructured structure that is Brazil, Utopia Films prides itself on maintaining familiar levels for international clients. The world outside our structure holds advantages for the budget-constrained international production community.

Prices can be negotiated; there is flexibility in regulations and always a means to an end. All within the wide embracing arms of the man upstairs, in the form of a statue on top of a hill.

Day and night he has watched over the city. Despite the exasperating struggles, I suspect, now and again, he gives a consenting wink. For more than 70 years he’s observed people who are black, white, brown and every shade in between jostle with the good, bad, evil, overbearing, generous, pious, selfish and corrupt.

Rio is sexiness, it is religion, prostitution; it is nuns on bikes. Beauty and ugliness live hand-in-hand. One feeds from the other. Nowhere else on Earth has the hypocrisy of humankind been displayed (and tolerated) more successfully than in Brazil. Life is about life. Live it, enjoy it, as Brazilians do. Despite its contradictions this city holds the key to my heart. If the world were a city it would be called Rio de Janeiro.