Written by Murray Ashton on Jan 20, 2012. Posted in Interviews

Christian was born and raised in Stockholm. Exploring his hometown and its surroundings as a youngster set the groundwork for his current knowledge, together with his great interest in design and architecture. 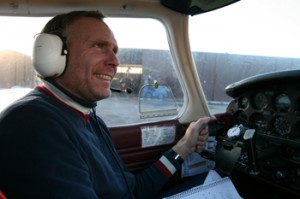 "My fascination for film and filmmaking led me to a two-year film education in Stockholm, followed by a couple of years as a PA.

"In 1995 I started Sweden’s first locations service. At that time no-one except those who had worked in the US knew how valuable this service could be so I had to start educating my clients."

The old town of Stockholm, the Archipelago and Trosa City - where the Germans come every year to shoot TV series - are the more popular locations.

I mainly cover the Greater Stockholm area and support all sorts of productions from stills photography to commercials and large-scale film productions.

Probably the Stockholm Archipelago with more than 30,000 islands. It has a very remote feel. The unique Old Town has untouched architecture that ranges from the 11th to the 17th Centuries.

Stockholm also gives great production value due to the proximity of natural landscapes. The city’s within 20 minutes of extensive woodland, beautiful lakes and the rocky shores of the Baltic Sea.

When filming on location you always have to deal with problems in some shape or form. Up to now I haven’t had any major incidents. People in Sweden still show a great deal of consideration towards film crews shooting in the streets.

I work mostly on commercials and feature films. The latest and perhaps largest production was the remake of The Girl with the Dragon Tattoo, directed by David Fincher.

Stockholm is a typical four-season location. In the summertime the sun rises at 3am, sets at 9pm and everything is lush, green and very bright. This surely makes a producer smile! The autumn is very colourful and the winter is special; the entire city is covered in thick layers of pure white snow. All lakes are covered with thick ice strong enough to hold cars.

Arlanda is the biggest airport with worldwide connections.

Where is your favourite wrap party venue?

What do you do with your time off and what you would recommend crew and cast do to visit, have fun and relax in Stockholm?

It is very relaxing for me to go out sailing in the Archipelago.