Written by Murray Ashton on Jan 19, 2012. Posted in Interviews

Filming on location in Moldova with Producer Veaceslav Cebotari

Veaceslav is a graduate of the UNATC in Bucharest, Romania. After working in Moldova as a Camera Assistant and then a DoP, he founded Diametral Film in 2003. The company helps productions find exciting locations in Moldova. Veaceslav is currently a Cinematographer and Producer. 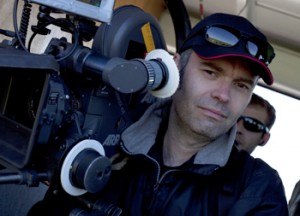 What does Moldova offer filmmakers?

Moldova is a small country (33,843 sq km) in south-eastern Europe bordered by Ukraine and Romania. Thanks to its proximity to the Black Sea it has a warm, temperate and continental climate, and you can count on 200 sunny days a year. The average temperature is 25 Degrees Celsius in summer and falls to freezing in the winter.

The beauty of filming in Moldova is that within a 20 to 100 km radius you can find everything from rivers, rocks and cliffs through to forests, vineyards and wheat fields. There are also extensive hills and caves, with the longest cave being 89 km long. There are more than 40 national parks in Moldova, the biggest being the Tsaul Natural Reservation. We also have a wide selection of urban locations.

We have a good relationship with the biggest Romanian and Ukrainian rental houses and can provide equipment at good prices.

In terms of equipment, most productions bring in everything they need, but there’s enough equipment locally to supply a mid-size production. There are still some infrastructural problems which are being resolved as more productions come into the country. We have a good relationship with the biggest Romanian and Ukrainian rental houses and can provide equipment at good prices. Crews are adapting well to the high standards foreign films demand.

The cliffs at Orheiul Vechi, the steep banks of the Dniester River in the north, the forests in Codrii (quiet and beautiful settings) and the Bugeak steppe in the south. Crews come to film here because of the good weather and unspoiled scenery near the towns.

What are the rare, more unusual locations not necessarily associated with Moldova?

The cliffs near Butuceni were used for a feature that was supposed to be the North Caucasian region; the mixed forests of fir and birch trees near Chisinau doubled for a southern region of Russia for a Russian feature; a Ukrainian steppe was filmed in the south for a Russian TV series and a rock area near Trebujeni was going to be a field near Jerusalem. In fact, besides the sea you can find almost any type of location.

It depends on the economy. The last feature we worked on was in 2010. Now we are in the research stage for a feature film for a Producer from the Middle East and we’re also in development on a docudrama about the Soviet period for one European TV channel. Meanwhile we provide various services for local advertising and TV clients.

Every tunnel in the winery is like a city street bearing the name of the brand of wine produced there.

Are there any tips you would like to share with our readers about filming in your region?

The main tip is to plan everything and make sure you have the right contact in each place. Depending on the particular permits and what you’re doing you need to go through Government departments. For crews from countries who need visas to Moldova you must be ready to wait a month or so to get it.

If you happen to travel across Moldova with your own car you need to be careful on Moldovan roads as the drivers here are known to be quite aggressive. Although it seems that Moldovan legislation aligns to that of the EU, I recommend you call the local production houses for useful information.

Which are the best airports to use to come and film in Moldova and who flies there? Any tips on customs clearance or film-friendly freight agents?

Chisinau International Airport is the main one and there are 17 airlines (Air Moldova, Lufthansa, Austrian Airlines, Turkish Airlines, Air Baltic, Tarom and others). These operate flights to 28 destinations all over the world. You should register large sums of foreign currency and declare all valuable goods with Moldovan customs authorities when you arrive in Moldova. Most of the big international freight agents have branches in Chisinau.

Generally all hotels in Moldova are really open to co-operate with film crews. Outside Chisinau there are many new hotels that are good. There are lots of places for a nice wrap party, but it depends of course on how much the producer is willing to spend. I recommend one of the big wineries.

There are usually set costs for Public Liability cover for film units and costs for insuring locations. Can you tell us about location insurance and possibly examples of costs in Moldova?

It’s complicated, but it’s possible to find an insurance company for unusual insurance tasks for this area, like location liability insurance. Prices can be steep depending on the insured sum and the duration of the filming. Sets, equipment and locations are 0.7% to 5.0% on the insured sum. Crew are about 1% on insured sum.

What would you recommend crew and cast do to have fun and relax in Moldova?

Moldova is the proud owner of some of the largest wine cellars in the world, featuring a fine collection of wines. The underground kingdom at Milestii Mici actually has a Guinness record for its size and its impressive collection, counting up to two million bottles. The galleries extend up to 200 km. Another one is the Cricova winery that also consists of many underground tunnels, passages and rooms that run for 130 km. Every tunnel is like a city street bearing the name of the brand of wine produced there.