Patrick studied film at Montana State University, before moving west to Los Angeles to pursue a career in the industry because, as he says, "that’s what you did”. He talks to TLG about his career, how the industry has changed over the last 20 years, and what it’s like to work with Eastwood. Patrick (left) had been working as a PA on a range of small productions in Los Angeles when an opportunity came up on a little movie called Thelma & Louise: “I was 29 when Thelma & Louise came along and I got onto that because initially it was crewed as a non-union production and I wasn’t a union member at that point. That eventually changed and so I took the opportunity to join up. It was great to work on a Ridley Scott production – a real top level project. There was a great amount of detail and high production values, and the equipment was really good.”

Since Thelma & Louise gave him his break, Patrick has worked with his fair share of top filmmaking talent and characters, from Al Pacino and Paul Schrader through to Paul Verhoeven and Sean Penn. Most recently he’s fallen in with no less a filmmaking legend than Clint Eastwood, who has a particular reputation for taking the same crew with him from project to project.

Patrick was Location Manager on Changeling and has since worked on Gran Torino, Invictus, Hereafter and now Hoover biopic J Edgar. Eastwood’s also renowned for doing only three or four takes per angle, but is he as decisive when it comes to choosing the filming locations?

Eastwood doesn’t like to be inundated with options when it comes to potential filming locations; you put together a handful of the best choices and he’ll make a decision.

“Yes, Eastwood is a decisive filmmaker,” Patrick smiles: “He works closely with his producing partner Rob Lorenz, who has a very good cinematic sense. Eastwood doesn’t like to be inundated with options when it comes to potential filming locations; you put together a handful of the best choices and he’ll make a decision.” 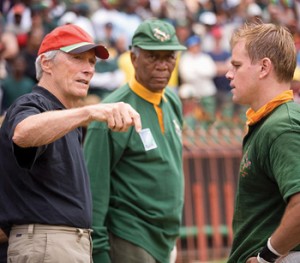 Despite being based primarily in the US, Patrick has worked overseas as well. He headed to South Africa for Invictus (pictured right, with Eastwood directing Morgan Freeman and Matt Damon), Eastwood’s telling of the 1995 Rugby World Cup that was hosted and eventually won by South Africa. Patrick is quick to point out that every project presents its own challenges, but filming in Pretoria for Invictus comes to mind for him as being a good recent example.

“We wanted to film in the city’s Capitol Building. It took a lot of negotiation and we had an issue when they decided to turn us down at the last minute. Luckily we were able to change their mind and we were able to shoot.”

He acknowledges that working on Eastwood’s projects makes things that much easier when it comes to securing locations; Eastwood’s name carries a certain amount of integrity. This was the case with J Edgar (pictured below, with Eastwood directing Leonardo DiCaprio), where the production got special permission to film in the Department of Justice and the Library of Congress in Washington, DC.

So has the job of a Location Manager got any easier over the past few years? Patrick has mixed feelings on the subject: “It’s harder because budgets are tighter and production footprints larger. There’s less money available and fewer resources, but at the same time expectations are higher. On the plus side, the coming of the digital age has been really good. Digital technology has made location scouting much easier and then there’s the positive impact of digital effects.

“We can now choose a location that might have a lamppost or a mailbox in the wrong place, because if need be we can remove it in post-production. It really opens things up and makes the process more flexible.”

The coming of the digital age has been really good. Digital technology has made location scouting much easier and then there’s the positive impact of digital effects.

He adds: “People in the industry who know the process have a lot of respect for the job we do. We interface with the real world and that’s appreciated by a lot of people.”

It’s certainly good to know that industry back-slapping for the locations team is alive and well, even if it mostly remains behind the scenes.

J Edgar is in the midst of a staggered global release.