Written by Murray Ashton on Feb 22, 2012. Posted in Interviews

Sam was born and raised in West Virginia. In fact, aside from three-and-a-half-years in Philadelphia during graduate school, he's always lived in the state. 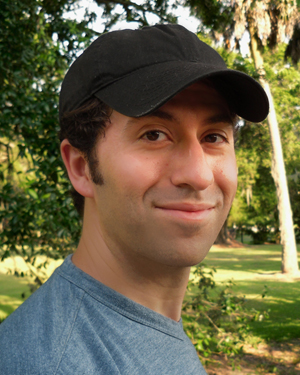 How did you become involved with locations in the area?

I already had a background in film and media through my education and other experiences, but one day in 2009 Pamela Haynes, Director of The West Virginia Film Office, contacted me about working for the office part-time reorganising their Locations Library and preparing it for an online incarnation.

What Pam didn’t know at the time was that from the age of two I’ve studied highway infrastructure and its geography within the entire US, and especially West Virginia!

As a kid in my grandparents’ house, I spent years toiling around making interchanges, signs, buildings, bridges and so on out of paper, cardboard and tape.

I’ve worn (and will wear again) many hats, including location scout, production co-ordinator, producer, PA, adjunct professor, talent, talent co-ordinator, locations librarian, board member for a non-profit film organisation, screenwriter and others. I also spent three years touring parts of the US with multiple short films on the regional festival circuit.

While we’re certainly not New York or Los Angeles, we do have vendor companies available for equipment rental, as well as a very competitive and advantageous tax incentive programme.

Sometimes, I think of myself as the Dick Van Dyke character in Mary Poppins. Today I’m a chimney sweep, but on my next gig I’ll be something else! Currently, I’m on a longer-term gig scouting locations in West Virginia for an upcoming historical miniseries.

How long have you been doing this?

I’ve been scouting since 2009, both as part of the state film office and as an independent contractor. I’ve been involved in film and media (both professionally and through my education) since 2000.

What can you tell me about West Virginia?

West Virginia is number 41 in size out of all 50 states, but due to its unique shape we not only reach into the dense southern hills, into deeply remote sections of Appalachia and into tundra-like plateaux and forested peaks, but also into the industrial towns of the ‘rust belt’ along the Ohio River in our northern panhandle, and even flatlands with Mid-Western cornfields in our more colonial eastern panhandle. We have deep river gorges and cities with skylines. We have everything but an ocean.

We don’t have any major studio facilities just yet, but we definitely have the space for them, should a bold individual or company be interested in investing here. While we’re certainly not New York or Los Angeles, we do have vendor companies available for equipment rental, as well as a very competitive and advantageous tax incentive programme. We also have a growing and hungry workforce across the state that’s more connected than ever before.

West Virginia is full of surprises.

While we’re often associated with the more rural aspects of our state, the advent of the internet and other information technologies is actually the first great equaliser that West Virginia has had for decades, and we can take advantage of that.

Which locations are most commonly used by film and TV crews?

Crews usually use the northern or eastern panhandles (Super 8, Unstoppable, Gods & Generals, The Deer Hunter), or they come to the metro areas like Charleston and Huntington (We Are Marshall, along with regional indies and commercials). Fayette County – home to the New River Gorge National Park – has also been utilised for its rugged beauty on several occasions (Win a Date With Tad Hamilton, John Sayles’ Matewan, commercials and industrials).

Anytime I’ve been challenged it’s been less about whether I can find an individual location and more about either receiving vague information on what is desired, or through a company’s preference to stay located within a vicinity that may not be the one-stop-shop initially assumed. It happens for honest and practical reasons and you work with it.

They will do everything in their power to help with location issues, permits and insurance information, recommendations for regional contacts and everything else they do.

My favourite ‘find’, however, was for a feature that ultimately didn’t shoot here. They were looking for flat and vast mid-Western cornfields in West Virginia and didn’t have high hopes for finding them because of our mountainous reputation. Because of my knowledge of roads and state topography I solved the mystery through deductive reasoning and without driving one single mile or taking one photograph.

First, I eliminated all the unlikely land areas in the state, concentrating only on what little was left, and then used the most reliable street-view and satellite services online to acquire geographic comparisons, honing in on the very best visual representation of their cornfields. I have never physically been to the spot I tracked down, but I was happy to know later on they were surprised and impressed. I love technology!

These days it’s mostly commercials. Some of the recent productions that have shot in West Virginia include JJ Abrams’ Super 8, Tony Scott’s Unstoppable and the Degree Deodorant Chain of Adventure webisode campaign. There was also the recent indie feature Doughboy and a Volvo commercial campaign; then there’s upcoming indie-feature Druid Peak. There’s definitely more coming.

The most important tip is cultural. Always remember that it is West Virginia; not just Virginia or Western Virginia. While the citizens here are very friendly and eager to be helpful, we are used to people not understanding that we’ve been a separate state for almost 150 years.

Otherwise – unless you’re in the mountains – the winters are generally mild, the summers very warm and the autumn leaves peak at different times in October, depending on which part of the state you’re in. If you do come here and find yourself facing challenges, the best thing you can do is to contact the West Virginia Film Office for help. They will do everything in their power to help with location issues, permits and insurance information, recommendations for regional contacts and everything else they do.

When aiming for the Charleston/Huntington area (the south-west part of the state), both Yeager Airport of Charleston and Tri-State Airport of Huntington are optimal. In the northern panhandle (the tip-top that resembles a finger) productions generally use the Pittsburgh International Airport 30-60 minutes away, due to its size and proximity.

In the eastern panhandle, the drive to Dulles International Airport (which serves Washington, DC) is a convenient one. While our state airports are generally small, I’ve never heard of productions flying into our region having any real problems.

I’m a little different than others when it comes to time off. I like to drive around and explore, find a good used bookstore, find a place for a long nature walk, or find the nearest coffee shop and café with wi-fi (which is where I’m typing this; from the Jumpin’ Java Café in Charles Town, West Virginia, where they just rewarded my graceful clumsiness with a fresh green tea).

West Virginia is loaded with recreational opportunities from skiing and hiking through to zip-lining and fishing. There’s also a shocking number of quaint shops and tourist attractions, a friendly population diverse in their understandings of self and place, from the cities and suburbs to the most remote ‘holler’ in the hills. My recommendation is to come, explore and relax; you’re home.