Written by Murray Ashton on Feb 10, 2012. Posted in Interviews

Filming on location in Saskatchewan with SaskFilm’s Tobi Lampard

Tobi has a background as an independent TV producer specialising in TV development. Over her career she has worked with broadcasters such as CBC, AETN, Discovery International and Canwest's group of speciality channels. 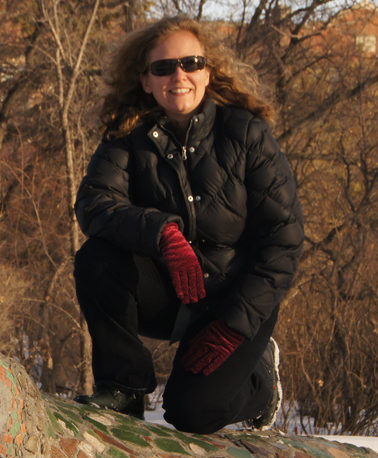 Working with an international client base, she has regularly attended such international markets as MIPCOM, MIPTV, Real Screen Summit, the Cannes Film Festival and the AFM. In 2010, Tobi joined Saskatchewan's film commission, SaskFilm.

“It was a welcome opportunity to continue to work in economic development and rekindle my passion for photography. As SaskFilm’s Location & Support Officer I work with producers based in Saskatchewan and abroad, scouting locations with the province’s talented Location Managers.”

Tobi works with the many levels of Government and private industry throughout the province to make Saskatchewan a film-friendly destination.

Tell me about Saskatchewan

Saskatchewan, Canada, is a big province covering more than a quarter of a million miles. It boasts three distinct eco-regions: prairies/grasslands to the south, boreal plain and boreal shield areas in the central and northern part of the province, and taiga shield in the far north.

Saskatchewan services can take a project from pre-production to post.

Most people think of farmland (we have great farmland with soft rolling hills) but our forests and lakes are pristine and our cities offer great urban looks without the headaches of filming in large cities. A 20-minute drive from anywhere in the city to an international airport comes in handy!

Saskatchewan services can take a project from pre-production to post.

We are home to the only purpose-built sound stages between Toronto and Vancouver. An equipment house is on-site in the stages and the province has DGC, ACTRA and IATSE offices. Our post-production facilities include HD online, Dolby E encoding and HDCam SR services, we're experienced working with Red Cameras, Red 2K and 4K files, and have recently added Digital Cinema capabilities.

For urban looks three cities are commonly used. Saskatoon is our city of bridges and the South Saskatchewan River flows straight through the heart of it. For turn-of-the-20th-Century, mid-West USA looks, many productions film in Moose Jaw, which has a picturesque main street and is only 45 minutes away from the Regina-based sound stages. Regina itself hosts many productions because of the sound stages. City Plaza has just opened downtown, which is an open area that includes a stage for concerts and performances – another exciting addition to the city’s locations.

The real treasure of filming anywhere in the province is the open sky and our incredible light, but in terms of unusual locations it has to be the Saskatchewan Badlands and Grasslands Park (pictured above). If your production needs places to double for Afghanistan or Middle East locations, the Badlands can bring incredible depth to the screen, along with safe environments and compelling tax incentives.

It’s a great reference for productions that have filmed in the province. It gives an idea of how locations are used creatively.

It used to be that taking advantage of the pristine northern forest and landscape (pictured below) was quite difficult, but now the north is opening up and this area can service productions quite readily. Our robust economy has been a boon to northern tourism where five-star resorts can now be found in the northern forest. These resorts can accommodate up to 200 people and offer air transport to their more remote resorts.

Scouting off-road in the Saskatchewan winter in search of a very remote farm. We were driving through rather large snow drifts and our visiting international Location Manager was taking before-and-after photos in anticipation of getting stuck! I’m happy to say we did not get stuck once.

What types of production do you work on and what has been filmed recently in your region?

Recently, SaskFilm created a locations blog featuring location photographs taken before and during the production. It’s a great reference for productions that have filmed in the province and it gives people an idea of how locations are used creatively.

Saskatchewan has hosted feature films, TV commercials, documentaries and series. Our generous tax credit of up to 55% of eligible labour on each individual project, with no content or copyright restrictions, helps drive the production volume.

Over the last few months Kim Coates (Resident Evil: Afterlife, Sons of Anarchy), Billy Boyd (The Lord of the Rings), Roger Christian (an Academy Award recipient for his work on the original Star Wars and Oscar-nominated for his work on Alien) have filmed in Saskatchewan. And over the years some of the talent that has worked here includes Charlize Theron, Terry Gilliam, Ryan Reynolds and Drew Barrymore, to mention but a few!

Snow - our rule of thumb for snow is that it’s generally on the ground from the end of October to the end of March.

Sunlight – it’s short in the winters but long in the summers so you have to plan to use it to your advantage. The shortest day of the year is eight hours of daylight and the longest is well over 16 hours in the summer.

Our crews are simply first-class and are used to working in winter conditions so they keep a film set moving! During our peak production volumes we are open to bringing crew members into the province when resident crew is unavailable. Saskatchewan’s labour tax credits include a deeming program that is unique to Saskatchewan. It is a training incentive in which non-Saskatchewan labour can access the base 45% labour tax credit.

Our producers, line producers and service producers have an in-depth knowledge of immigration processes and how to best take advantage of SaskFilm’s tax incentives.

Saskatchewan is known for its hospitality and we are proud to be film-friendly as well. We have forged great relationships with stakeholders in our filming communities and tourism associations are part of this group. From business amenities to creature comforts, our hotels and restaurants offer it all!

As an example of insurance costs, the City of Regina has a mandatory liability insurance certificate of CAD2 million general and CAD1 million automobile.

Saskatchewan has something for everyone but we really are a utopia for outdoor enthusiasts. We boast more than 100,000 lakes in the province, so ice fishing and fly fishing are popular, as is camping, snowmobiling and golfing.