Written by Malcolm Scerri-Ferrante on Feb 7, 2012. Posted in Contributors

“We want to bring an existing 70-foot racing yacht from Spain to Malta and shoot it in the water tank.” This was the first phone call from the UK. But this proved too costly, which prompted the producers to opt for a more creative solution; build a model of the yacht for the wide shots and a life-size section for the live action shots. 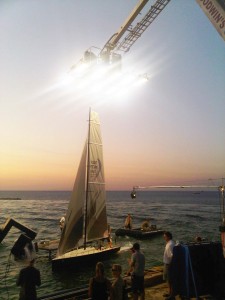 So far so good. However the details of the brief revealed a few more complications. This was to be a TV commercial and an online interactive video so two sets of boards had to be simultaneously shot with motion control so the driver’s actions in the car can move seamlessly - with the touch of a computer mouse - to him skippering a racing yacht in stormy seas.

The allocated shooting budget was very tight and demanded that a four- or five-day schedule be squeezed into three days.

As if that wasn't enough the shooting dates coincided with what was officially the busiest shooting month ever in Malta. Hotels, rental vehicle companies and other suppliers were already strained. Local crews and equipment were basically unavailable.

Everyone sweated and stressed - some with anxiety and others from sheer hard labour - until the result prompted the agency to declare "F****** awesome!"

Servicing company The Producer’s Creative Partnership (PCP) took up the challenge. Known for handling large shoots like Sam Brown’s Bacardi Island, PCP put together a team of top German and French technicians and local production staff. Many of the locals were still in training but at least had some required local knowledge. 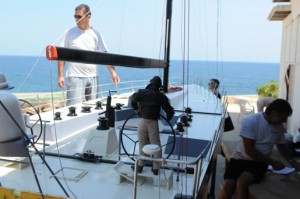 Malta’s water tank facility built a superb 18-foot model and 26-foot life-size section. Despite many changes to the original plans they finished on the commissioned delivery date: two days before filming.

Then the Art Director had to take over for dressing these sets, which dangerously left only a few hours for camera and SFX rehearsals; talk about cutting it fine.

As five other productions were filming simultaneously, resources were seriously depleted. So the directors and key crew were warned weeks ahead of filming that this was one commercial where any major overnight changes would be difficult to achieve.

What was originally a tight crew formed on a very tight budget was now to be spread even more thinly between two units working in different locations.

But the demands of commercial production being as they are, the changes that began in early prep naturally escalated. On the eve of filming the traveling shots the island’s most reputed car welder was busy working through the night creating four new A-frames to accommodate the new ideas for achieving the complicated shots.

Motion control requirements changed regularly where every rigging was concerned and everyone was warned that any measurement outside ten centimetres of accuracy would result in disaster. 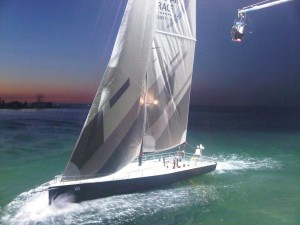 One of the biggest feats was creating the illusion of the boat racing through the sea when in fact it had to be held completely static on-camera for the motion control rig to perform its magic.

White air bubble effects and hosepipes rigged underwater would usually be more than enough, but Stylewar directors Henry Selder Moore and Martin Sjostrum wanted a high racing speed effect, a speed which, as it transpired, had never been previously created in the studio’s 46-year history.

More underwater hosepipes were added, together with marine outboard engines, until finally there wasn't enough space to fit any more. Everyone sweated and stressed - some with anxiety and others from sheer hard labour - until the result prompted the agency to declare "F****** awesome!"

Some water shots were then enhanced in post to dramatise it even further, making the shots look as impressive as those in feature film The Perfect Storm.

A car drag-racing track was used to film the travelling shots and a hill was especially constructed for the car to show off its four-by-four capabilities. 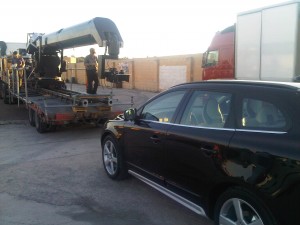 Very early pre-calls were the only answer to shooting the two boards within a tight three-day schedule. Crews had to be prepared to work 18-hour days. Everybody’s stamina and concentration was to be tested to the extreme.

The massive motion control arm was laid on a low-loader vehicle, not rigged to the vehicle (that would have been too simple), but rather sitting on a track so the entire crane's base could move at the same time as the low loader was driven.

Every movement was planned meticulously with technicians glued to their computers endlessly. And then the absence of a UPS (stabiliser) connected to the motion control led to a sensitive computer board being shorted. An hour later, when all was fixed, one of the lighting condors that had just come off another film set decided to pack in. But despite such frustrating bad luck everyone soldiered on to complete the day’s mission.

On the final day of filming the unit had to be split up. What was originally a tight crew formed on a very tight budget was now to be spread even more thinly between two units working in different locations. But this was the only way to complete the shots. By the end of it all everyone was ready to collapse.

Fortunately - and unfortunately - most excellent works are created from blood, sweat and tears.