Written by Murray Ashton on Mar 14, 2012. Posted in Interviews

David Singleton is a Location Manager based in Sydney, Australia. He’s been scouting and assisting Location Managers for the last three years, with a stint on Fremantles' Masterchef in between.

He started out in 1997 working for a Korean production company and has worked in locations in Sydney for more than a decade. 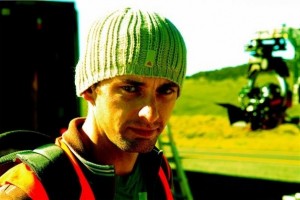 I cover the Sydney Basin, New South Wales, Canberra and south-east Queensland. It would probably be easier to answer what locations we couldn't achieve here! There are no mountains over 2,200 metres, so if you want snowcapped peaks we would probably struggle.

We can provide many types of urban and natural backgrounds, and the great thing is you usually don't have to travel too far to uncover them. Sydney is a city with enough wide open spaces combined with dense urban buildings so we can accommodate many types of looks.

Filming infrastructure is well established within the region and we can satisfy every level of production with vibrant and practical studios, the latest equipment and crews with experience in all conditions. Indeed the conditions of the Australian continent can breed the toughest and most adaptable crews.

It's no surprise the Harbour City's water views and iconic landscape brings the greatest percentage of crews to film in our state. With such favourable conditions, fine weather and short but spectacularly diverse architecture, the city and its Harbour are the headline act when it comes to filming NSW.

There are locations like Carriageworks, Allied Mills and the Royal Automobile Club that accommodate filming very well, as well as a host of clubs, parks, public buildings, historic houses and regions that are available for use. It all depends on each of the potential locations’ availability, but there’s no shortage of workable back-ups - you just have to do some research.

The somewhat 'unplanned' urban planning around Sydney has not only given architects and engineers headaches from time to time, but has created pockets of suburban growth vastly different in any direction you go. A city more beloved for its natural beauty can provide equally breathtaking urban spaces.

It's the history of growth in the city and the state that creates a balance between the stages of our developmental past and creates a stark visual reminder of our rich history on every street. Architecture was shaped in unique ways by influxes of immigrants, each with different cultural backgrounds, and combined with the natural sandstone atop which Sydney sits, you have all the ingredients for a scouting smorgasbord.

I usually think there are three types of scouts you can do. There's the scout 'by the numbers', which means you will have or find a list of existing places and you go through them until you find the winner, have a few options or even prove the location doesn't exist naturally. Hospitals, golf courses and pubs are locations that you don't really have to 'find'.

The second is the 'day build'. Finding the right location can also mean fitting in with tight schedules. Some jobs can be amazingly fast-paced and to get through the shooting schedule means finding multiple locations to shoot without the unit having to pack and move. Visual idealism can be compromised with logistical sense, but it doesn't make it any easier; it can be much more difficult to find all the locations you may need within a stone’s throw of one another.

The last type I call 'the brief'. Scouts of this nature can be the most difficult. Never have you relied on the luck of turning your head just at the right time to see the house, or the perfect streetscape. You may just stop to pick up a coffee after pacing the streets for hours and find exactly what you’re looking for. East West 101 Season three for its unrelenting pace had us in a title fight for the best part of the shoot. The expansive vision of the Director combined with the intricacy of setting up the locations, sandwiched between a lightning-fast schedule, left little room for error. We pulled it off and it looked amazing; well worth it.

I finished Brothers In Arms for Screentime in December, a great six-piece drama on the feud that led to the 1984 Milperra Massacre. Previously I worked on a Beyond International Documentary Drama called Between the Great Wars 1919 -1940, and I spend most of the year on the ABC and Screentime legal drama Crownies, assisting Carl Wood. In the region recently there's always lots of TVCs. Dramas like Wild Boys and films like Dead Europe and The Great Gatsby; there's always someone pointing a camera at something!

Australia can be a physically difficult country to film in. The wide open spaces and the flora and fauna can be as dangerous as they look innocent. This has prepared us to thrive in the conditions and develop our own techniques to deal with them. The climate is generally temperate, with long warm spells and quick storms that rarely set in for the day. It has taught us to always be prepared for any conditions, no matter what the outlook.

There's the main Airport, Kingsford Smith, and a secondary airport in Bankstown. All of the major airlines fly into Sydney. There are regional airfields in most towns and there are some fantastic helicopters and pilots for scouting.

There are a great many hotels and to name only a few would not do justice to the rest! I'd suggest the location of the hotel is more important. For Harbour Views you might think about the Shangri-La, for Downtown convenience you may look at the Hilton, or in the heart of Chinatown try the Medina Executive.

When it comes to the wrap party, as long as the bar tab puts in an appearance and the staff are friendly, there are lots of venues in Surrey Hills, Newtown and Glebe.

I enjoy recreational photography, playing football and taking time out to explore this beautiful country and spending time with my family. From the coast to the country there’s always something exciting to see and do.