Written by Murray Ashton on Mar 26, 2012. Posted in Interviews

Pancho has worked as a Location Manager on features, ads and stills shoots in Argentina since 1995. In 2003 he moved to the Tucumán province in the north-west to focus on filming in the Tucumán, Jujuy and Salta provinces. 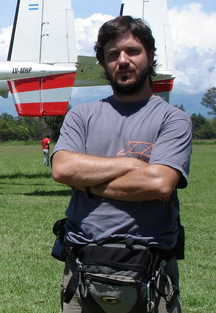 "I specialise in working out of the city where the locations are incredible but often difficult to work in. I'm always looking for new locations to help producers develop their projects. Show me a location reference or a script and I'll tell you where to find it."

Tucumán is an incredible province. Its geography is wonderful and varied. You can find fields, forest, jungle, green meadows, hills, mountains, deserts, cactus, small towns and cities. Everything is less than 200km away so you can pass from mountainous jungle to cactus desert in one hour on good roads.

Jujuy has similar features in addition to salt flats and ground deserts, roads and mountain rivers, and small indigenous villages with beautiful architecture. Altitudes range from 400m to 5000m.

In Tucumán it's the jungle in Aguas Chiquitas or La Florida. Fields, farms and crops in Tafí Viejo, and then green meadows in Tafí del valle. Deserts of cacti and pre-Inca ruins can be found near Amaicha del Valle.

In Jujuy there are the deserts of Salinas Grandes Purmamarca and the historic towns of Humahuaca and Yavi. Also, the forest in Calilegua. Next to these two provinces is Salta with its varied landscapes in Cafayate, Cachi, Moldes and Iruya.

The Puna of Jujuy and the red-rock formations of Cafayate Salta. There are cracked deserts and salt flats only 60km away from a spa hotel.

In Tucumán, Villa Nougues is a French-style village unique to the area and the rolling grasslands and green hills of Quebrada del Portugues are like the Highlands of Scotland.

I worked on the Oscar-nominated Aballay, a gaucho Western set in 1890, when it filmed in Tucumán's desert. We spent six months building roads and shelters in the desert with a very limited budget as it was an independent film.

Production logistics at Salinas Grandes in Jujuy are always complicated because of the altitude (3600m). Any problems that haven't been anticipated can take hours to sort out. There is no water, shops or houses nearby. Every eventuality must be planned for.

What types of production do you work on most and what has filmed here recently?

Many car and truck commercials film here, most of which are international. Recent shoots have been for the Toyota Hilux, directed by Alejandro Toledo, Hyundai with Sweet Films, TGV Train with Tango Films and VW Passat CC with SCP, as well as the feature Aballay.

It is a region with many benefits for productions. There are really low costs, easy permitting and support from the Government of Tucumán. You can also have access to restricted natural areas for filming.

The climate is the best in the desert, with sun all year round and almost no rain. There's rain in forested areas in our summer. Autumn and winter are dry with days of clear skies. The temperature is warm all year round. Cities with medical centres are very close to the locations. Pre-production times are short and fast; provincial Governments expedite permits and authorise shoots in villages, routes, lakes and nature parks. We have a lot of European immigrants and a local population with indigenous faces, all of which is good for casting.

The deserts in Jujuy are very close to the hotels so it's easy to produce and very low-cost.

Which are the best airports to use to film in your region and who flies there? Any tips on customs clearance or film friendly freight agents?

Tucumán, Salta and Jujuy have airports with several daily flights to Buenos Aires. From there to the best locations and hotels it's anywhere between 15 minutes and two hours. There are very good paved roads and highways from the airport to the hotels.

What are the most film-crew-friendly hotels in your region and what's your favourite wrap party venue?

Jujuy hotels in Tilcara and Purmamarca like Terrazas or El Manantial are very good and comfortable for the crew. In Tucumán a good hotel in the capital city like Catalina’s Park or in Tafí del Valle like Lunahuana, is close to local filming locations. The best wrap parties are in Purmamarca and the capital of Tucumán.

Location and crew insurance. There are usually set costs for Public Liability cover for film units and costs for insuring locations. Can you tell us about location insurance and possibly examples of costs in your region?

Insurance costs are similar across Argentina. Tucuman and Jujuy, as well as Salta province, are very quiet places without danger for the crew or the equipment. There is really no theft or violence in the majority of locations and towns outside cities, not even in the small towns where the hotels are.

What do you do with your time off and what would you recommend crew and cast do to visit, have fun and relax in your region

The best thing is to enjoy nature and learn local customs. People in the small towns are very kind. You can take walks in the forest, jungles and deserts, go prairie riding, tour vineyards and enjoy typical food and local wines. Montanas Tucumanas trips are the best!

The better places to relax in Tucumán are Tafí del Valle and San Pedro. In Jujuy the best places are Purmamarca and Humahuaca. Also go to Cafayate in Salta to touring wineries and vineyards. The weather is amazing, warm all year round without snow.