Written by Murray Ashton on Mar 5, 2012. Posted in Interviews

Filming on location in Tanzania with Peter Jones

Peter's 1976 Tanzanian summer job working with the renowned archeologist Dr Mary Leakey at the Olduvai Gorge turned into an eight-year stay. He became involved with filming due to the number of film crews that regularly visited Olduvai to interview Dr Leakey and other scientists. 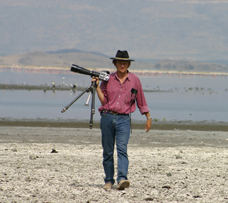 Peter worked on Simon Trevor's 1977 Bloody Ivory - an early film on the poaching in Kenya's Tsavo National Park - and did the occasional bit of fixing and guiding to make ends meet:

"Once I’d decided to stay in Tanzania I got into the safari business and began guiding full-time. That evolved into starting my own company, Tanganyika Film & Safari Outfitters, in 1991. Film work was always on my mind, but it's only been in the last seven years that I’ve gotten really busy. I now only do film work – no more safaris!"

Tell me about Tanzania

I only operate in Tanzania - anywhere on the mainland and Zanzibar. This offers a huge range of locations from the Indian Ocean, national parks, Tanganyika and Victoria lakes, and, of course, Kilimanjaro. But there is so much more. Tanzania takes three days to drive across and that's not just due to the road conditions – it's a really big country.

Tanzania and Zanzibar offer an extraordinary array of locations. There's amazing underwater potential off the islands – Pemba in particular.

In general there is not much infrastructure for incoming crews and they generally have to bring most of what they need. That will be changing this year as I have just imported a large amount of grip equipment, camera mounts and batteries for cameras. However, I know I will have to battle suspicion of local talent and locally-available equipment.

The most common location requests are to film Zanzibar, the Serengeti, Ngorongoro and Kilimanjaro. After that it's all over the place: Cichlids in Lake Tanganyika, malaria medicine distribution in Lindi and hunter gatherers; the list goes on.

Projects tend to be year-round as we have a great climate. The only tricky time of the year is April when we got most of our rainfall (in a normal year).

Tanganyika Film owns a private 11,000-acre ranch at West Kilimanjaro that can match many East African locations. This is a great outdoor studio where wildlife and people, sets and so on are needed.

3D and reality TV seems to be the most challenging so far and we had a large dose of both in 2011!

We have great local villages, towns unchanged since the 50s, huge rivers and lots of wide open spaces both in and outside national parks. In parts of western Tanzania you can drive through forests for a whole day without seeing anyone. It's amazing that more feature films have not used Tanzania, as the natural areas are varied and plentiful.

3D and reality TV seems to be the most challenging so far and we had a large dose of both in 2011! From set-up time in the field, equipment quantity, power requirements, crew numbers and so on, they are very challenging. However once you’ve done one you know what to expect next time.

I get a real mix of projects on my doorstep, probably because there aren’t many people doing what I do in Tanzania. Documentaries and commercials dominate, but the occasional reality show and feature project keeps the year interesting.

African Safari 3D, directed and produced by Ben Stassen of nWave, has been our biggest recent project. It was a co-production with Studio Canal.

Advance planning and letting your fixer know all that you want and might want to do! Very often directors see something else interesting on the way and want to stop the cars and start filming. Tanzania is pretty regulated and specific permissions are needed for many areas. We can’t always be as flexible as they would like. At least a one-month lead time would be great, but we can deal with shorter notice.

The three main international airports we use are Zanzibar (Aboud Karume), Dar es Salaam (Julias Nyerere International) and Kilimanjaro International, which is situated in the north between Moshi and Arusha. Many of the bigger international airlines fly into one or more of these: KLM, Emirates, British Airways, Ethiopian and Kenya Airways are the most frequent.

Customs is a bit of a headache for temporary importation of equipment. Tanzania does not use the Carnet system for equipment, though they do for motor vehicles.

Arusha Airport is for light aircraft and has scheduled flights throughout the region, including the national parks. Airlines we like to use there are Regional Air and Coastal Aviation – both have great scheduled services and also offer charter aircraft.

I recommend travelling with film equipment rather than air freight if at all possible, as the lead and clearing time for air freight can run to several days.

I love the Slipway in Dar es Salaam as a crew hotel. It's got secure parking, three restaurants, a variety of room types and very good rates. It's on the water and not far from the city centre. There are plenty of other hotels of course, but not with this level of flexibility. On Zanzibar Mtoni Marine is great in a similar way (close to Stone Town without being in it, on the water, two restaurants and so on).

In Arusha we tend to use the Arusha Hotel as it's central and just a short walk from our office. KIA Lodge at Kilimanjaro Airport is useful for late arrivals.

My favorite wrap party venue would probably be one of the restaurants in Stone Town, Zanzibar: Mercury’s (named after Freddie Mercury, who was born on Zanzibar), Livingstone’s and so on.

There are usually set costs for Public Liability cover for film units and costs for insuring locations. Can you tell us about location insurance?

I have had to cover myself with full general Public Liability insurance as there is nothing available here specifically for film crews or locations. I’m insured as a Safari Operator as I supply transport and accommodation, and this includes coverage for filming equipment.

Time off? What’s that? Crews tend to work full-time and then leave! Shoots on Zanzibar are easy and an afternoon dive or snorkelling trip can easily be planned (tides permitting). Elsewhere it's harder as distances are huge. Generally crews hope to have a day or two at a nice hotel to wrap before leaving.