Written by Murray Ashton on Mar 9, 2012. Posted in Interviews

Todd was born in South Dakota and shifted to a career in film early on. He started working as an Assistant Location Manager in 1995 and then moved to New Mexico in 2006.

He now works as a Teamster Local 399 Location Manager and won Location Professional of the Year at the California on Location Awards (COLA) in 2011. 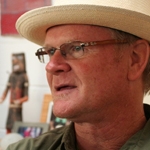 Tell me about the region you cover

I’ve worked all over and can cover any region given to me – my last movie was in North Carolina and before that it was Los Angeles and Oakland. Before those movies I did three in a row in New Mexico and they all covered a wide area of New Mexico. I have scouted over 20 states and areas of the US and some scouting outside of America. I love working in New Mexico because it’s like working at home but I know LA, Baltimore, Washington, DC, North Carolina and Texas very well. I became interested in working in other places of the US with the skills learned as a 399 Location Manager. Teamster Location Managers initiated classes in all aspects of filming and increased the skills and knowledge of its members.

California has the widest variety of location choices on the planet, in my estimation, and the best of everything. What I offer any production is that if a location is there I will find it.

The landscapes are a big draw in New Mexico from deserts, mountains and amazing roads through to the rivers and vast plains of the east. Albuquerque has a multitude of looks that can play for various US locals. The western towns around Santa Fe - Bonanza Creek, The Eaves Ranch and the Ford Ranch - are utilised a great deal. The two-lane highways are amazing and a fair amount of control can be had.

Las Vegas, New Mexico, is a town founded by the Spanish and when the railroad came the employees built homes and buildings like they had in the Midwest so there is a diverse look in the town – it can play for anywhere USA. Madrid is a small mining town that was abandon in the 60s, came back to life and has an unusual look for New Mexico.

Zia Pueblo has amazing landscapes that can be used for filming as well as usage of lands on other Pueblos in the Rio Grande Valley. The vast plains in eastern New Mexico are impressive, as are the Pueblo lands. Albuquerque also has a wide range of looks from old Spanish buildings to modern architecture.

There was a couple. One was filming on the US Texas, a national and state historic battleship, for Pearl Harbor. The ship was commissioned in 1914 and survived two wars. I was asked to get permission to have explosions on the ship as well as kinapak explosions in the water near the ship’s hull.

After finding an engineer who had dealt with the ship ten years prior and had an understanding of the hull, and getting information about kinepak explosions and their wave impact, I had him write a letter saying it would be alright. After a lengthy meeting with various state officials they approved two days before prepping would begin.

The Taos Gorge Bridge for aerial and practical shots for the movie Paul was one where a lot of hurdles had to be jumped to get our work done. During filming someone spotted a body 750 ft below. We dismantled the interior filming apparatus from the helicopter and our pilot and EMT used it to recover the body. After this was done the Taos Sheriff’s Dept closed the road again but allowed us to film.

I work on movies almost exclusively, although I would be open to commercials – it’s just that I am usually working one movie to the next with some R&R between. The last movie I did in New Mexico was Paul and after that I did Moneyball in Los Angeles and Oakland. This year I did The Hunger Games in North Carolina.

The altitude in New Mexico can be something to adapt to. Albuquerque is over a mile above sea level, while Santa Fe and Taos are 7,000 feet. Local crews are very good and three to five deep for movies and TV. I would expect with the 25% rebate there would be more commercials here because the state is rich in vistas and opportunities.

Albuquerque International Airport and the Santa Fe Regional Airport are serviced by American Airlines. In LA there’s LAX and throughout California there are numerous choices.

Albuquerque has many choices from the Nativo Lodge and the Hotel Albuquerque to the Hyatt, Tamaya Resort and Los Poblanos. Santa Fe has the Hotel Santa Fe, La Fonda, Bishops Lodge and La Encantada. Both these places also have homes that can be rented. Taos, Las Cruces and Las Vegas have many choices.

I spend it making art and hiking, biking, reading and travel. For a crew here there are an amazing number of things to do. You can visit Santa Fe and Taos (shopping and visit the old Plazas and Churches). You can visit the many Pueblos in the area and seeing their ceremonies.

The music in the area is always interesting including the Santa Fe Opera and there are many fairs and social events open to the public. There are many museums in Albuquerque, Santa Fe and Taos. Also great drives in the mountains, hiking and visiting the ancient ruins are a must. New Mexico is an amazing place to visit and work.