Written by Murray Ashton on Mar 19, 2012. Posted in Interviews

Jaime worked various PA jobs in the industry while studying in the early 1990s and then in 1995 he became a runner for Lee Films International, the company that he has been working for exclusively for the past 15 years. 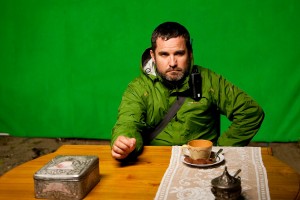 What makes you decide on where to shoot?

I think the first thing to be considered is the location. It is also very important to check all the legal aspects involved in a production. Double taxation agreements, local legal limitations or differences with your legal system and cultural differences that can also affect different aspects involved in a production. Of course cost-effectiveness, especially during this global crisis period, is something to take into account, alongside cast, crew and other technical aspects.

What would you have liked to have known beforehand about some of the filming locations you’ve been to lately?

We always try to get some reliable feedback about the country and the company we are hiring for the first time. It is always valuable to have the opinion of somebody with previous experience of filming there.

However, it is also very important to remember that each specific project is developed under a specific set of circumstances that may not reflect the whole truth. We also check previous experience and reels, we use TLG’s forum to cross check information and so on.

How do you decide which is the best production service company to use?

We have a wide international contact network that helps us find out what are the best options available in a certain country. Our international experience is also helpful to find out what company seems to be more professional and accurate during the bidding process.

It is not always easy to decide which company we use. Nowadays money makes the difference in most cases. The competition is tough worldwide.

Are there any particular production service companies or film-crew-friendly hotels you would like to give a special mention?

Over the past 16 years I have had the chance to shoot with many production service companies. Among all these companies I would like to highlight some of them because of their professionalism, commitment and positive attitude: Radke (Scott McKenzie, Merrie Wasson and Jeff Low) in Canada, Bright Pictures (Taylor Lawrence & Rudy Callegari) in the US and Moonlighting (Philip Key and Nicci Perrow) in Chile and South Africa.

What's been was your hardest on-location challenge to date?

I think the hardest challenge was during a shoot for a worldwide campaign for the European football championships in Lisbon in 2004. The Portuguese production service company working with us turned out to be the most unprofessional bunch of people I have ever met in this business.

We had to solve most of the permitting problems with the local authorities ourselves. What the service company had told us was possible during pre-production turned out to be anything but, despite the fact that they’d had plenty of time to prepare everything. Since then, though, we’ve had good experiences in Portugal – it’s a great country to film in.

Filming in Cuba in 2005 was a challenge because the commercial blockade made it complicated to track down basic products. I remember having to buy 16mm film stock on the black market. Also, it’s the only place I’ve worked where the crew weren’t hired for their experience, but rather for how close they lived to the selected filming locations. This was the result of a shortage of fuel.

Spain is my favourite because of the diversity and beauty of the locations. We have good weather, a great array of amazing locations within a reasonably-sized territory, a good crew base, a modern transport network, great food, a multi-ethnic cast and we’re still cost-effective compared to most other European countries.

Given your international filming experience, which parts of the world do you feel you’ve gotten the best production value?

Recently I had a really good experience shooting in Latvia. Uruguay is also doing well, but it has certain limitations in terms of the variety of locations compared to places like Argentina and Chile. Hungary is an attractive destination as well.

I love to cook for my family and friends.