Written by Murray Ashton on Mar 28, 2012. Posted in Interviews

In college Veronica was taught scriptwriting by the former Executive Producer of The David Letterman Show, so when she headed for Hollywood she already had a few contacts.

"For the first few years I tended bar at the Whiskey-a-go-go and worked for a film development producer. After I while I got bored and wanted to learn production. I started producing industrial videos and live shows for Big Pharma in my very early 20s."

One day Veronica responded to a job listing at a small agency (it doesn’t exist anymore) to be their producer.

"At 25 I walked in, realised I was the department, had an 'Oh crap' moment and then called everyone I knew for help while I produced my first million-dollar campaign."

Are you now fully employed by an ad agency or are you a freelancer?

I am a freelance integrated agency producer and president of a not-for-profit organisation out of the US called poolhouse. We (40 freelance producers and myself) founded it back in 2007 and it has been the best part of my career. I love poolhouse dearly. We aim to educate and help people.

Where are you currently freelancing and what are you working on?

I am currently freelancing at Ogilvy Brazil on a global campaign for Coca Cola.

How long have you been a producer?

Since the very sexy industrial days of producing; it’s been a little over ten years.

Vancouver, Cape Town, underwater near Marsa Elam in Egypt (picture above sailing into the port), Mozambique, Jamaica, Berlin, Iceland, Lithuania and constantly in Los Angeles. My next job will take me to four continents (very exciting!) including South America; a lot of amazing things are happening south of the equator.   In addition I've casted in Sweden and London, and edited in Munich and London.

What would you have liked to have known beforehand about filming in these locations and would be happy to pass on to others considering filming there?

Weather: Knowing we were on the cusp of cyclone season off the coast of Mozambique would have been helpful.

We were shooting underwater and the boat got hit by small cyclones and capsized (pictured). No-one was hurt and we re-shot in Egypt. The dailies from the storm were amazing.

The lesson? From an agency producer perspective always get a weather bid. If you are going into territory where weather conditions could be a factor talk to the client about weather insurance.

Casting & Wardrobe: This is always an issue in Eastern Europe – make sure you have money in the budget to cast and fly in diverse talent from London and/or Sweden and even Berlin (they have the best talent). Same with wardrobe; you will most likely need to bring in a wardrobe designer/assistant and wardrobe.

Talent Contracts: Always make sure there is a proper 2nd AD on set.

Script Supervisor: Now that we are shooting more and more digital and more content, always make sure a script supervisor is there or your editor will growl at you when you get back to the cutting room.

Are there any particular companies you would like to give a special mention?

MarkenFilm out of Berlin was amazing; I love them. We had a massive shoot there last November and ran into some production issues, but they totally fixed everything. They were welcoming, brought top talent to the table and created the most amazing sets I’ve ever seen. The spot is currently still under going editorial changes.

If you stay in Berlin, stay at The Hotel de Rome but eat elsewhere. Great gym and great pool!

If you are editing and posting in Munich stay at The Cortiina. I love this hotel - it has the best breakfast in the world. Then post with Velvet, Matthias Zentner’s company.

Every thought in my mind was turning my stomach upside down while they were in the air; don’t worry they were all insured up to USD10 million!

We wreaked havoc on Lithuania and SOS Naked but Andrius and his team bent over backwards for my agency and created beautiful sets. I was craving a chicken calad so one of the PAs ran home and personally made me it for me. It was amazing!

Iceland and the weather. Our production service company was Truenorth, who were fantastic. I can’t say enough about Leifur, his talented team of producers and their in-house location guide.

We were working with a US-based director and production company. I was the agency producer. The task was a large one. We were doing a PR stunt and our main talent was a very large volcano (pictured above), which in Icelandic was called 'The Gates of Hell'. Yikes!

I felt we spent our money wisely by choosing Berlin over a couple of other choices where we would have spent money bringing in talent and other key crew.

Weather was against us the entire time. That would have been okay but we had to be in the air for most of the shots. The plane had to take off with the door open and we strapped in two 'drop specialists' and the DoP with basically a very strong leash. Every thought in my mind was turning my stomach upside down while they were in the air; don’t worry, they were all insured up to USD10 million!

We had to have the most clear sky from above and below a volcano to achieve our mission. When the sky cleared, the plane finally went up, we got our shot and everyone came out alive. Leifur also delivered lobster soup to us hot and cozy on top of volcano rock in the middle of nowhere - amazing.

I like shooting in Cape Town. There are nice crews, great casting, beautiful weather and food, nice people and I love the culture down there. If you have a second head to a nearby safari.

Berlin, funnily enough. It was win-win. Yes, we paid a tad more but we got top talent, the hair/makeup/production designer were all incredibly talented and we didn’t have to fly them in.

Yes, a few of us are developing a new foundation for Alzheimer’s and Dementia. It's called ELEPHANT.

If I have a little extra in my budget, and talent and sets are the biggest priority and could make Berlin work again, I would. Sometimes it’s less about being cheap and more about spending your money wisely. I felt we spent our money wisely by choosing Berlin over a couple of other choices where we would have spent money bringing in talent and other key crew.

Jamaica! Dancing in the club with Usain Bolt and the rest of my team!

Well, since I am an agency producer we take the project through editorial, VFX, finishing, grade, mix and ship. I tend to work on larger, more global projects and average only two to three projects a year as most are about five or six months of work for me. 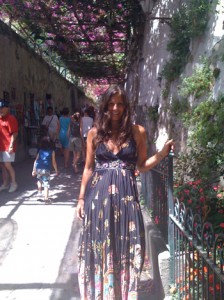 After that I am dead and usually pack up and head out to travel and relax. One year I went to Positano and didn’t come home for three months (pictured right). In the spring of 2011 I went to Munich to visit friends and Venice, Italy, for some R&R after a couple of large projects.

I just run off somewhere, turn my phone off and read tons of books and shut down. This summer after the job I am on now I plan to hide out in Sicily for a few weeks.

At home. I have a very creative and quiet environment in my East Village apartment. It’s filled with books and my favourite things. I grew up in my father’s restaurants so I am an avid cook and love to just cook, read and relax.

What can you tell us about your ELEPHANT project?

A few of us are developing a new foundation for Alzheimer’s and Dementia called ELEPHANT. They say an elephant never forgets. Many of us are affected by this disease and the few of us that are working on the early stages of this project all have parents and grandparents with it.

I am losing my father and I got tired of being angry, so we are going to do something about it. The mission statement and logo are at the very early stages, but I can tell you that the creative teams working on this are fabulous and won’t expect anything other than greatness for the look of ELEPHANT.

This will be industry-based and we are also developing various fundraisers and races (runs and swims). In addition we'll be creating a discussion platform on our website for those who are suffering and need someone to talk to, or ask questions or in need of a resource. I tear up every time I think about this; we cannot wait to launch.