Written by Murray Ashton on Apr 12, 2012. Posted in Interviews

Michael first moved to China in 1990 to study at the Beijing Film Academy. After three years of intensive studying he decided it was time to start his career. First he became a diplomat for the US Government and then in 1997 he made his first film in China. 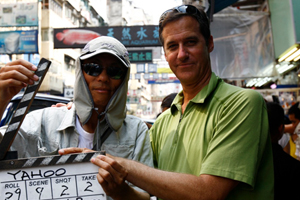 "It was love at first site. I knew China was my destiny. I came to study Chinese, to become as fluent as I possibly could and to try to be ahead of all the people who would come later once they found out what an amazing place China was."

Michael had been involved in production before leaving for China. He worked for several production companies and productions in his hometown of Los Angeles.

“My crazy idea was to first go to China to learn Chinese, and then figure out how to combine a love for filmmaking with a new love for China.”

“Since then it’s been one exciting adventure after another."

Tell me about the region you cover

We cover mainland China and Hong Kong. There are many types of locations on offer but people mainly come to shoot the iconic images like the Great Wall, the modern city of Shanghai, rice fields, mountain temples or the amazing skyline of Hong Kong.

In the big cities like Beijing, Shanghai and Hong Kong, we have great crews and most of the equipment you would find anywhere else in the world. There are also excellent studios with enormous stages.

Post facilities are also slowly coming online. Method Studios has just purchased a post facility in Hong Kong. Technicolor has a facility in Beijing and is about to start a new one in Shanghai.

The most commonly-used locations for TV commercials are the iconic locations mentioned above. For that we have great back lots where the Chinese market films its dramas.

We are working on a big Hollywood film at the moment and have introduced them to some amazing locations in the western part of the country.

We do a lot of filming for the local market as well. These types of productions tend to want to shoot the more modern aspects of China.

Once in a while a TV commercial will want to shoot ancient China. We also have great backlots for this as well.

I’m not sure if people from the west know this but China has some amazing deserts.

We are working on a big Hollywood film at the moment and have introduced them to some amazing locations in the western part of the country.

The most difficult location issue is what to do when the local Chinese client wants modern and ‘aspirational’ looks, but the European director wants something with ‘local’ flavour. This dynamic plays itself out on almost all of our Chinese/international productions.

What types of production do you normally work on?

We work on a combination of commercials, TV, feature films, photo shoots and documentaries. TV commercials are our bread and butter.

The most important tip is to choose the right production partner. Too often foreign companies get attracted by a low bid.

In February we spent a couple of days in Hong Kong shooting the popular Danish TV show Borgen. We’ve also worked for the past six years with the popular American reality TV show The Amazing Race.

The most important tip is to choose the right production partner. Too often foreign companies get attracted by a low bid from a local company but end up in big trouble as the expectations on both sides are completely different.

Which foreign producers, production companies and directors have you enjoyed working with?

I really love great directors who appreciate our hard work in getting them terrific images. When they are happy, I am happy.

In China we normally take care of the local Chinese crew accident insurance. There are no set costs.

What are the most film-crew-friendly hotels in China and what is your favourite wrap party venue?

In Beijing I love The Opposite House. In Shanghai, I love the Puli or URBN. In Hong Kong my favourite is still the Landmark Mandarin Oriental or Intercontinental. My favourite wrap party venue is Go Kart Racing!

In China we normally take care of the local Chinese crew accident insurance. There are no set costs, but in comparison insurance costs in China are reasonable.

In Beijing if our director has time I love to put him or her in a hotel in the old part of town for the first couple of days. When Alejandro came last year we arranged a beautiful courtyard hotel for him to stay in. We had our location and pre-production meetings in old courtyard homes that had been turned into cafes near his hotel.

This was a great way for Alejandro to get to know the city. Once we started shooting, I moved him into the crew hotel.

Another of my favourite places to take cast and/or crew in Shanghai is the old canal town of ZhuJiaJiao. It is very close to the city. But when you are inside this old town, you really feel like you have been transported back to ancient China.

Also in Shanghai the ever-expanding high speed train network makes it easy to make a quick side trip to cities like Suzhou or Hangzhou. If time permits I love taking people to see other beautiful Chinese cities.

Also, China offers exceptional massage therapy. It’s completely different from Thai massage or the Swedish oil massage. The Chinese, I think, have the best technique and theory in the world.

After a full-on location shoot what do you do to relax?

I find peace and quiet with my family. We love to travel so we often find ourselves in one of Asia’s amazing places like Thailand or Bali.