Written by The Location Guide on Apr 11, 2012. Posted in Interviews

I was born and raised in Los Angeles (yep, some of us are actually from here, I swear!). I earned my MA in Telecommunications & Film at The San Diego State University and upon graduation moved back up to LA and scrapped for anything I could find in the industry… 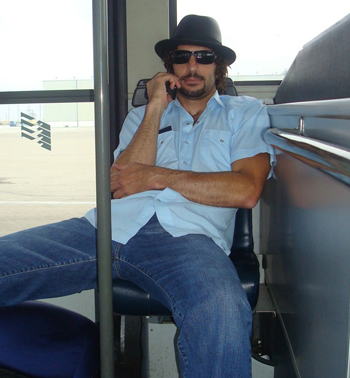 I got steady work at Concorde-New Horizons learning the Roger Corman method of low-budget straight-to-video feature production, as well as at Propaganda Films, where I met many of the people I would work for and with years down the line.

One day I got a call from a bro who wanted to know if I could help his friend move his commercial production company from Santa Monica to Venice. I took the gig. The company was Go Film and I ended up working there for over five years learning the ropes from some great people.

An opportunity then led me to H.S.I. productions where I was lucky enough to be hired as a bidding producer. The transition from a boutique company to more of a factory system was integral to my development as a producer.

I attribute a fall off in overseas production to a number of factors, but most significantly to tighter budgets and the weakness of the US dollar.

From there my path led me to the lovely offices of Aero Film, located on the beautiful Santa Monica Airport. We all share the love of flying, anything to do with the ocean and all things extreme!

The volume of overseas production I have been associated with has dropped off consistently over the past few years. I attribute this to a number of factors, but most significantly to tighter budgets and the weakness of the US dollar. In the last year or so we have shot in South Africa, Australia, Tahiti and Switzerland.

As for out-of-state work, we have been all over the map: Colorado, Oregon, Washington, Nevada, Utah, Illinois, New York, Connecticut, Florida, Atlanta, Louisiana, Hawaii and Alaska.

We shot 35mm film for our project in Tahiti (imagine that!?) and since they don’t have any labs there we had to deal with the dilemma of how to get the undeveloped stock back to the US without being x-rayed by the airlines. We contacted the Tahiti Tourism Board in Los Angeles and they were a great help. They arranged for a representative to meet us at the airport and made the process of getting it in and out of the country a whole lot easier.

Are there any particular companies you would like to give a special mention?

In South Africa we used AFS Productions, who I have always had great experiences with over the years. Dale and Brin Kushner are well-versed in the keys to a solid production - good food and good times!

For the Australia shoot we used Beach House Films. Tiare, the EP over there, knows how to roll with the punches and has a great attitude toward solving the problems at hand. A heavy dose of the infamous Aussie dry wit doesn’t hurt either.

In Switzerland we used Stefan Zucher’s Alpine Films. Stefan’s been at it forever and really knows his stuff. As a bonus you get to hear him tell stories about all the extreme skiing footage scenes he shot for the Bond films!

I have one word for you: snow. Seriously. We will get dumped on all winter and sure enough, come May we will get boards that have a truck driving though virgin snowpack. Never fails.

Alaska and Tahiti were greats examples of exciting new landscapes. The rugged beauty and extreme conditions really shines through the film.

You can do amazing things in post, but if you want performance car work in snow you need the real deal. So the bane of my existence for a few months out of the year is to find snowy roads I can own. I’m very lucky that Klaus Obermeyer, one of our directors, grew up skiing in Aspen and has quite a few tricks up his sleeve!

Now, more than ever, I think that agencies are responding to new and different ways to approach their creative. A new spin on things is always refreshing. This can take place in the 'LA zone' where crew and the availability of special equipment allow you to try things that haven’t been done before; we drove off-road vehicles out of a cargo plane for a Sony PlayStation spot.

Or, it can also be finding that exotic location that they never considered. The excitement that is generated from the exploration of a new environment is contagious. Alaska and Tahiti were a great example of that. The rugged beauty and extreme conditions really shines through the film.

Where, in your international filming experience, do you consider you got the best production value?

You know, production value these days is such a relative term. I can have a crew of five people armed with 5Ds and GoPros that can do what used to take a crew of 30. That said, I think the places that I have had the best experiences with realise first and foremost that this is a service industry. South Africa, Czech Republic and Argentina are a few places that always come to mind. Perhaps it is due to the fact that they have been doing it so long and really understand the process.

Anywhere that has tequila!

I learned to surf when I was five in Hawaii and to this day nothing centres me more than spending some quality time in the water. When you are out there you only have one thing on your mind – the next wave. There is nothing better than pulling into a deep bowl or cracking the lip. Preferably both. It always clears my mind and refreshes my soul.

Other than that I love live music. Any type will do as long as it’s honest.

Where to you find peace and quiet?

I love to read and write. One of my best friends and I are currently developing an episodic that revolves around two ex-commercial producers who sell a script and open a bar. They say write about what you know, right?