Written by Murray Ashton on Apr 5, 2012. Posted in Interviews

On location in Czech Republic with Executive Producer Fady Salame

Fady grew up in Lebanon. He joined Leo Burnett Middle East as an Art Director in 1997 and was then transferred to Leo Burnett Prague in 1999. In 2001 he became Executive Producer at Dawson. 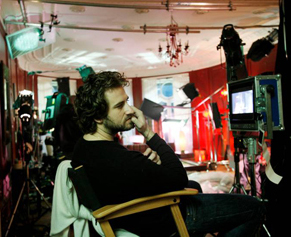 Fady founded The Sofa Productions in 2007. In 2009 Sofa merged with Unit Pictures to form one of the most influential companies in the region, Unit+Sofa.

We focus on shooting in Czech Republic but we also cover the Austrian Alps and Slovakia. Over the years it's proved more economical to bring crew from Prague to these regions rather than from Bratislava or Vienna.

As for infrastructure, Prague is known for having a great variety of equipment and what is not in town can be brought with no extra cost from Munich, which is just three hours away by road. Czech crews are the best in the region and have plenty of international experience, especially the art departments, camera crew and stunt teams.

I personally feel that Czech Republic provides an incredible variety of architecture.

Studios are state-of-the-art at Barrandov Studios, and there are alternatives all around town. Casting is now much better as casting databases now have a much greater ethnic mix. We also have support casting in Amsterdam.

In short, most of the projects we have produced in the past few years have used local crew. Foreign production companies try to bring the least possible amount. They normally travel with just a Producer, Director, DoP and sometimes a Production Designer.

What locations do you have on offer?

We have all sorts and I personally feel that Czech Republic provides an incredible variety of architecture, as well as natural locations.

We have deep forests, sand quarries and a whole range of wild looks.

There's a good chance you'll find the solutions to your board's needs here.

We even recreated the D-Day landings in Normandy recently for Sony Playstation (pictured below) and Independent Films.

On every location shoot there are always tasks that need to be sorted to everyone's satisfaction - it's production versus the authorities.

One such case was a Timberland shoot with Lynn Fox and Blink Production. We were shooting in a protected area of the country and there was a shot of a bear, three wolves and a wild bore running next to each other on camera at the same time. It was really hard to convince the authorities that everything would go to plan.

We are currently preparing the special effects for a Lasse Hallstrom shoot.

In the end everything was fine, but we had a couple of sleepless nights prior to the shoot!

We mostly do commercials and music videos as that's how we started. We have done a couple of short movies; one of them was for Ghost Recon via Little Minx, which premieres on May the 3rd.

We are currently preparing the special effects for Lasse Hallstrom's new movie The Hypnotist.

Czech Republic is compact and a nice place to shoot; Prague in particular. It is friendly and easy to get around.

The one thing I always say is don't ever take a cab from the street as there is a 99% chance you will be ripped off. Luckily this only applies to our cab drivers. The rest of it is straightforward. Most of our clients are from the EU or North America so they don't need any paperwork or permits to enter the country to shoot.

Our production rules are transparent and easy to get your head around.

Who have you most enjoyed working with over the years?

The list is long and I wouldn't have the space to mention everyone, but all our clients (Producers, Directors, DoPs or agencies) have been a great support and have been spreading the word about us. We feel we owe them our existence and success, and we try to pay them back by giving the the best service we can.

I'm happy to say that most of them became our good friends.

Well, lots of hotels in Prague provide their services for filmmakers with all their specific needs. We are lucky to have amazing relationships with the top hotels in Prague. Over the years they have learned that film crews are a different species to their more typical guests!

We mostly use hotels that are near our offices so clients can be independent and walk everywhere. A few worth mentioning would be the Mandarin Oriental, the Augustine and the Four Seasons. When the budgets are tighter, I would recommend the Josef or Maximilian; great boutique hotels right in the heart of the old town.

The insurance costs vary depending on the location and the local crew liability depends on the nature of their contract with the production company. But in general we charge around 0.3% to 0.5% of the production budget as insurance as this helps cover these costs.

What would you recommend crew and cast do to relax in your region?

Come and talk to us! We'll give you a few ideas of how best to spend your time!

After a full-on location shoot what do you do to relax?

Nothing beats coming home and spending time with the family. I also love long cycle rides.