Written by Murray Ashton on May 15, 2012. Posted in Interviews

Jose started his career studying a BA in Film & Television at USC in 1986 and then an MFA at the American Film Institute in 1988 specialising in directing. He directed documentaries for several years before creating Kinema Films in 1993.

Over the past 20 years Jose has produced or line produced more than 15 features including Blow, Love in the Time of Cholera, The Air I Breathe and The Chronicles of Narnia: The Voyage of the Dawn Treader.

Five years ago Kinema Films opened a commercial division to great success. They have produced dozens of commercials, working on major brands with companies like Smuggler, MJZ and Knucklehead. 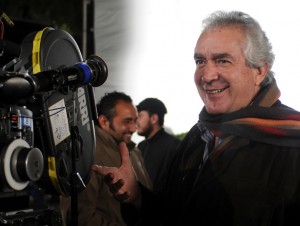 We focus our production efforts in Mexico and Cuba, although we have also produced in Belize, Guatemala, Dominican Republic, the Caribbean and Colombia. Mexico has an extensive variety of locations, from desert and jungle through to rainforests and beaches on turquoise blue ocean. Mexico also has European architecture, Spanish colonial Haciendas and towns, modern, American-looking cities, cowboy towns, waterfalls and Savannah, mountains and pre-Hispanic ruins. Perhaps the biggest asset is Mexico’s weather, with a yearly median of 68 to 82 degrees Fahrenheit.

Mexico has over 6,000 miles of coastline from coral reefs in the azure waters of the Caribbean through to whale watching and surfing in the Pacific Coast, and perfect powder-white beaches in the Baja Peninsula.

Mexico has the second oldest film industry in the world after Hollywood. During World War II Mexico produced, for several years, more films than all the countries of the world put together. Historically, and because of its proximity to the US, it has been a back-lot for Hollywood’s use in Westerns through to more modern action adventure movies like Titanic, Tomorrow Never Dies, Man on Fire, Collateral Damage, Zorro, Master and Commander, Apocalypto, Traffic, Pearl Harbor and The Day After Tomorrow.

Mexico has one of the top-five largest equipment companies in the world, EFD, a one-stop vendor with subsidiaries in Spain, Los Angeles, Colombia and Cuba, alongside four other major equipment companies. In addition, Mexico constantly exports bi-lingual directors, actors, DoPs, production designers, sound specialists and editors to Hollywood.

Mexico has two major studios - Churubusco Studios in Mexico City and Baja Studios in Rosarito Baja California - as well as several smaller studio facilities in different cities. We have an extensive cast base in Mexico and we produce over 3,000 commercials a year. Mexico has become a melting pot of European, Latin American and Asian people.

What are the more unusual locations in your region that our readers would not necessarily associate with Mexico?

Recently we were asked to find a huge, ancient ceremonial temple city with no similarities to Aztec or Mayan ruins, for a well-known video game. We came up with a bizarre privately-owned temple called Templo Otomi hidden in the forest in the outskirts of Mexico City. This is truly one of the most bizarre locations we have in Mexico. Jails are always difficult, but finding an abandoned, brand new jail for an X-Men commercial was also something quite surreal.

We work on a lot of features and in the last three years we have provided production services to dozens of projects for brands including Corona and Axe (both with Smuggler), VW, Lego, LG and Smirnoff (all with MJZ) and British Airways (with Knucklehead).

Mexico’s ongoing problems with drug cartels have dominated international perceptions of the country in recent years. How has it affected the film and commercial industry? Is it safe?

We have not seen one single incident directly affecting a commercial production. Simply put, last year over five million US tourists visited Mexico, a 2% increase over 2010. Mexico continues to be the country more visited by US tourists.

We have to understand that security is a matter of perception and that the majority of the drug crimes are located in specific cities and these are mainly the border towns. Mexico City is in the centre of the country and both coasts remain extremely safe.

I already mentioned the great weather that we have throughout the year. I must add that we basically have two seasons; dry and wet. The wet season normally runs from July to September. You need no vaccines to come to Mexico, but we have state-of-the-art hospitals if you do have any problems.

Security is a matter of perception. The majority of drug crimes are located in specific cities and these are mainly the border towns.

We always provide foreigners with private bilingual drivers who accompany them permanently during their stay. Pre-production times are usually the same as in the US, as well as crew numbers. Usually foreign projects only bring a producer, director and sometimes a 1st AD. The rest of the crew are always Mexicans, such as DoPs and production designers. No work permits are required for foreigners and no visa is required to enter Mexico for most countries of the world. Mexico recently adopted the carnet visa system for customs in case equipment, props or special wardrobe needs to be temporarily imported.

Which international production companies have you most enjoyed working with in Mexico over the years?

For features I particularly enjoyed working for Walden Media and Twentieth Century Fox. For commercials we truly enjoy working with Smuggler and MJZ.

We have several film-friendly hotels such as The Four Seasons and The St Regis in Mexico City, and the Hotel Esencia in the Mexican Caribbean. My favourite wrap party venue is a restaurant in Mexico City that has a small ring where the crew pretends to be a matador encountering a ridiculously small bull.

Location and crew insurance. There are usually set costs for Public Liability cover for film units and costs for insuring locations. Can you tell us about location insurance and possibly examples of costs in Mexico?

We normally charge 1% of the budget for insurance purposes. This fee covers third-party property damage, work comp for all Mexican Crew, and full coverage for vehicle rentals and equipment. Negative, foreign crew and talent, and equipment failure is normally covered by the umbrella policy of our clients.

What would you recommend crew and cast do to relax in Mexico?

This is a never-ending answer! Foreigners enjoy - I better say adore! - Mexican food known for its intense and varied flavours, colourful decoration and a variety of spices. They love Tequila, Mezcal and particularly the famous hospitality of our people.

In general foreigners enjoy the beaches and the amazing variety of hotels and resorts offered. Also they love to visit ancient ruins, Diego Rivera’s murals, the Frida Kahlo museum and the famous National Museum of Anthropology. Shopping is always an attraction because of the country’s variety in hand crafts, silver, leather and precious stone jewellery.

After a full-on location shot what do you do to relax?

I find a beach and have a Corona!