Written by Murray Ashton on May 1, 2012. Posted in Interviews

On location with producer Alec Sash 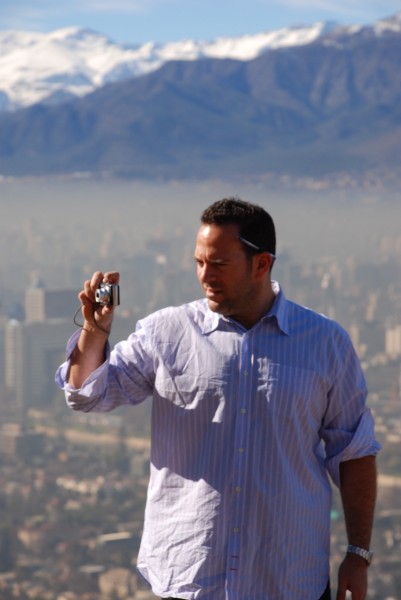 How did you get into the industry?

I’ve been interested in movies for as long as I could remember but never thought it possible to have a career making films. In 1995, a few years after college, hating my job as a stockbroker, I called a friend who was an AD at the time. I told him I wanted to be an actor and asked what I could do to break in. He told me actors are losers and I should start as a PA. I quit my job and a week later was humping film equipment on a music video. That led to commercial work and I've never looked back,

How did you become a producer?

I was a Production Assistant for about two years and it was really time to move up. I've always been a very organised person with a keen eye for details and the ability to multi-task; production was definitely my calling. I started as a PA, then followed the path and eventually started to produce.

I started in the business in the spring of 1995. I started 1998 as a Production Co-ordinator, finished the year as a Production Manager and produced a few high-level print campaigns in the middle. I've been a full-time producer since 2001, working with many production companies for many different people.

Recently, I've been on a non-stop run with Jonas Akerlund at US-based Serial Pictures. I'd say Radical Media is where I've worked the most over the years, having produced for 13 different directors on many projects. I've also produced for many of the world's top fashion photographers and years ago I produced many projects with the incredible Peter Lindbergh.

In the last several years I've shot internationally in Berlin, Paris, Rome, Santorini, Buenos Aires, Santiago, Qatar, Phuket, Montreal, Cape Town and the Bahamas. Over the years I've shot all around the states but this past year it's been Minneapolis, Baltimore, Los Angeles and New York City.

Is there anything you would have liked to have known beforehand about filming in these locations?

As a Producer who works mostly on the road and can rarely take my Production Manager along, I'd say the biggest lesson learned is to get a good feeling about your local crew, especially the Production Manager and Location Manager, before you book them. Sometimes you don't have a choice as the pickings are slim, but try to get a referral and communicate your expectations from the beginning. If they don't sound right, they're usually not.

Are there any individuals, places or companies you would like to give a special mention?

I had a great working experience with JB Bernard in Paris from Peninsula Films. We bought the Eiffel Tower for two nights to shoot Justin Timberlake for Givenchy and JB pulled it off without a hitch. I also love the folks at Twist Films in Santiago, who were great, as was Some of Us in Rome providing a top-notch production and crew for an Apple project.

My favourite location hotel is the Mauna Kea on the Big Island, Hawaii. I also love Hotel Eden in Rome, Soho House Berlin and La Selva Vineyard in Tuscany. We stayed at La Selva years ago with a crew of about 20. We had an Italian grandmother and her daughter prepare all of our meals with fresh fruits, vegetables, meats and of course wine all grown locally.

Without a doubt the hardest location was Qatar. I helped produce three films to help Qatar win the 2022 World Cup. There was no local crew or equipment, securing locations was a nightmare and everything took forever. That was a tough one.

I love Hawaii, anywhere in Italy, Paris, Buenos Aires and Los Angeles. I love the food, the crews and the local spirit. But I prefer to shoot in good old New York City so I can be close to my family and work with the guys I came up with.

I'd say Santiago was the best bang for the buck at the time. I shot there twice in 2007 and had a great experience.

I'd say Santiago was the best bang for the buck at the time. I shot there twice in 2007 and had a great experience. The crews were fantastic, the food was good and the Ritz Carlton in Santiago was excellent and so cheap. It was also with one of my favourite Directors, Juan Delcan.

The best wrap party by far was at the Hapuna Beach Prince Hotel on the Big Island of Hawaii. It was a full-on luau with dancing girls, a band and karaoke, then a DJ. One of the male models was married by our local Hawaiian Conservation Office who happened to be a Hawaiian priest. Everyone ended up drunk in the pool, then the ocean. It was an unforgettable night.

Years ago I would try to stay a few extra days wherever I was shooting and have a little vacation. Now I want to get home to see my wife and daughter, but my favourite thing to do is to wake up late and walk around the city, eventually getting a long, deep massage. I have so much adrenaline when on a big project so it's always great for me to come down off the high, relax and chill.

I love the beach to catch my breath and reboot, especially after a tough project. Tulum Mexico is one place I know I can go for real peace and quiet. As a freelancer, my ideal situation is to finish a tough one but know you have something else coming up.

If on location, I like to explore my surroundings, eating and drinking where the locals go; I hate hanging with the tourists no matter where I am so getting the inside scoop from the locals is invaluable.