London-based 2AM has climbed a mountain in Chile in a new spot for Cadbury’s Wispa chocolate. Using the tag-line Time well mis-spent, the ad features a group of friends dragging a giant inflatable figure called Walter up a remote mountain peak in a celebration of pointlessness. 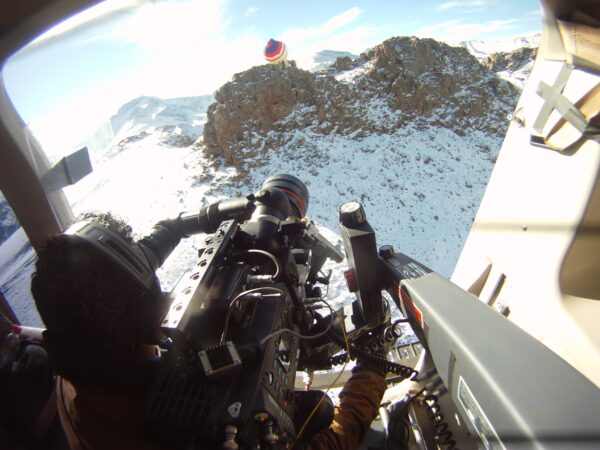 Mountainous filming locations all over Europe, North Africa and New Zealand were considered, but the team ended up in South America in a bid to avoid crowded ski resorts and unpredictable weather. Filming took place in various locations around the Andes in Chile, although the shooting spots weren’t more than two hours from Santiago city centre.

Chris Cable was Production Co-ordinator for 2AM: “It was important for us to find somewhere with a full range of dramatic locations that looked markedly different from each other so we could effectively convey the epic journey of our team of friends and Walter (the inflatable figure), plus each location had to be tricky for our characters but not impossible!

“Chile had all these elements, epic vistas and soaring, barren mountains, while Chile's autumn provided a stable, workable climate with long days.”

Chile had all these elements, epic vistas and soaring, barren mountains, while Chile's autumn provided a stable, workable climate with long days.

Shooting at altitude had its challenges, not least given that Walter acted like “a giant kite”. Access to the final peak was threatened by heavy snowfall the night before, but they managed to get up using four-by-four vehicles, quad bikes and a helicopter. Getting down was just as problematic as safety concerns forced some road closures.

Cable comments: “We shot our summit scenes on the final day of filming, shooting on the peaks around the Valle Nevado ski resort. Being off-season we had great freedom, although we still had to be careful not to include any evidence of the resort, so we framed around ski lifts.”

Aerial shots from the helicopter captured some of the summit scenes and the team also used several HD HERO2 GoPro Cameras, the small durable units that are often used to film extreme sports events. These were strapped to cast members and to Walter, but the footage didn’t make the final cut.

The team filmed over Easter, which proved problematic as Chile is a devoutly religious country and so everything shut down over this period. There are freight issues as well. Cable adds: “We were shipping out Walter - our hero prop - so it was vital to allow extra days to compensate for any potential problems in transit.

“South American countries are known for being a little 'tricky' when it comes to customs so we were very keen to make sure we gave ourselves plenty of contingency on this! Use a good international freight company with a local presence or contacts as this will reduce anxiety massively!”

Cable also advises the use of ankle-supporting hiking boots, as well as relevant pills to tackle altitude and motion sickness. He concludes: “The only way up the mountain (unless you can afford helicopters for you and your crew) is with a four-by-four and - trust me - this is a winding, sometimes slow and bumpy ride!”