Written by Murray Ashton on Jun 4, 2012. Posted in Interviews

Filming on location in France with Producer Daniel Thom

Daniel was born and educated in France and in England, and became a Location Manager for a French-Japanese production house in Paris in 1990. He set up Espe Productions in 1995 and produces TV commercials, TV movies and features in France and a few other European countries. 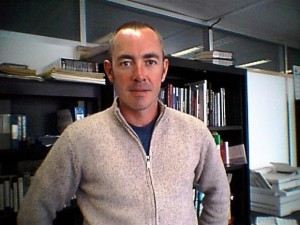 What can you tell me about the regions you cover?

Espe Productions works primarily in France, which has an amazing variety of locations. The country offers strikingly different landscapes, climate and types of architecture within a relatively small area. We work with a Casting Director, Production Manager and two Location Managers specialised in the south of France and Paris.

What locations are most commonly used by film and TV crews in these regions?

Paris and the French Riviera.

The Natural Marine Park of the Calanques near Marseille is completely unspoilt and resembles Greece. The lakes and forests of the Jura mountains in the east of France show nature at her best and medieval villages kept intact. The medieval city of Locronan in Brittany is completely intact.

Shooting inside a haunted chateau in the South of France, where both the brand new camera and HMI lights exploded during the shoot! Footsteps were heard at night in the empty attic and the negative stock was exposed with a ghost-like image!

What types of production do you work on most and what’s been filmed in your region recently?

Both the brand new camera and HMI lights exploded during the shoot! Footsteps were heard at night in the empty attic and the negative stock was exposed with a ghost-like image!

Are there any tips that you would like to share with our readers about filming in your region?

Getting EU entry visas for some countries is quite lengthy so it’s best to start pre-production ahead of time. Permit applications for public domain locations in Paris in case of traffic jams also takes a while so it is always best to allocate three weeks between the final location selection and the first shoot day.

Charles De Gaulle in Paris is the first point of entry into France for most airlines and there is a good network of regional airports. The high-speed TGV train lines serve the whole country.

We always work with a hotel brokerage company that makes sure our crews are booked in film-crew-friendly hotels. My best wrap party venue was in the French Alps in La Plagne on the Olympic bobsleigh track in the middle of winter after shooting a car commercial there for a week - we were finally allowed to ride the bobsleigh!

Location insurance is covered by Espe Productions’ general liability contract, and crew are insured through their individual work contracts.

Shopping in Paris, walking on the cliffs in Etretat (Normandy) for a day break away from the city and visiting the medieval villages in the wine-growing region of Alsace in Eastern France. Then there’s the new Pompidou modern art museum in Metz, swimming and boating on the Alpine lake in Annecy, touring the villages of Provence and countless other things!

How do you chill out after a shoot and find peace of mind?

Trek in the Pyrénées mountains.