Written by Murray Ashton on Jul 4, 2012. Posted in Interviews

Julia began her career in film production in 1995 as a Unit Manager in the German commercial film industry. She spent several years honing her skills in feature film production before becoming a freelance Line Producer for many German production companies in 1998.

Most of the time Julia works with Munich-based HelliVentures, a production company specialising in sports and outdoors projects. Julia’s expertise and focus is the production of international advertising where she has gained a reputation for her experience as a Line Producer for international productions.

Most of the time Julia works with Munich-based HelliVentures, a production company specialising in sports and outdoors projects.

She’s been fortunate to have had the unique opportunity to experience firsthand the challenges of producing abroad when filming in the most diverse regions of the world. In September 2011, looking to expand her horizons while also utilizing her 14 years as a Line Producer, Julia signed on with Global Production Network (GPN) as their European representative.

One of the most difficult productions for me, which at the same time was also one of the most beautiful, was a movie filmed with HelliVentures in the Amazon in 2003. We were producing a documentary with a handful of world-class surfers (Carlos Burle and Ross Clark-Jones) riding a tidal wave on the Amazon known as “Pocoroca”. This film won many international prizes, including at the Sundance Festival.

We found the very best location in a very remote part of the Amazon – simply getting there from Sao Paulo was an adventure taking several days via airplane, bus and boat, and always in fear of the pirates there.

For many days we lived and worked on a glorious riverboat, normally used to transport cows. We filmed, sang and laughed in spite of the challenges of such a remote and even dangerous location. The big challenge, however, was to have everything, including a helicopter, jet skis and boats with four film cameras ready in position at exactly the moment when the enormous tidal wave would roll up the river.

Thanks to the fantastic support of the service production company - Cristian and Joao of Ocean Films in Brazil - the shoot went off smoothly and without a hitch. This trip truly was a highlight in all of our lives.

Do any other experiences come to mind?

Another thrilling project was in Uganda, also with HelliVentures, where we were shooting with a celebrity. In the beginning we were unsure who to work with down there and what to expect. Which were the health risks? Was there a movie industry? Where should we rent equipment? What could we expect from the local crew?

We were lucky to have been commissioned by a great client and an innovative agency, which were readily prepared to go on this adventure with us. I quickly realised how crucial it is to have a competent production service company when working in Uganda. Our service Producer, Mario Zvan of Blue Sky in Kenya, supported us diligently and navigated us through the most critical situations. Only through his long experience were we able to work smoothly and keep to our schedule.

What has been your toughest on-location challenge to date?

I started sinking into icy water while riding a Snow Cat on a glacier (with crew and equipment) at a height of 4,000 metres and that makes your heart beat in your throat! Also, have you ever tried to find a pair of jeans that would fit seven-foot-two basketball hero Dirk Nowitzky in the middle of the night?

I love shooting in nature, on the mountains, on the water, up in the air. Generally out there everybody is more relaxed and the team spirit rides high, making it possible to work more efficiently. 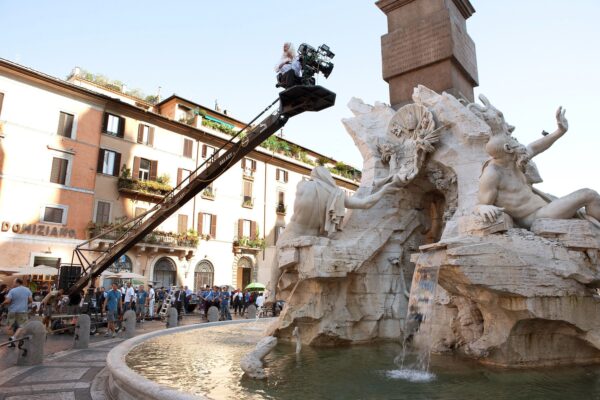 I wish there was a universal answer to your question because then we would all produce only there. Of course it is dependent on the actual project and that is for us to know case by case. The flexible producer will always be open to find new ways, which might also include filming in countries where you haven’t shot before. With the right choice of local crew surprising cinematic and financial success can be achieved.

The Amazon and Kampala in Uganda are wonderful locations if you happen to have the right people to provide production services. Here you will only be successful if all involved are working together smoothly. That’s why bonding is essential! The prerequisite for perfect teamwork is trust in your service production team. In my opinion that is the crux for a successful shoot abroad; the best production must fail if you picked the wrong local team.

The Amazon and Kampala in Uganda are wonderful locations if you happen to have the right people to provide production services.

Are there any particular production service companies you would like to give a special mention?

Yes, I would love to recommend three exceptionally great service producers who all work in the manner we all wish for: Alihan Karagul at FPS Production in Istanbul, Ute Leonhardt of Panorama Films in Italy and Bulgaria, and Zsofia Kende of Angel Films in Hungary. Check them out!