Written by Murray Ashton on Aug 28, 2012. Posted in Interviews

On location in Tunisia with local Line Producer Philippa Day

Philippa worked briefly as an Assistant Casting Director on a Tunisian film and then returned to settle in the country after a few years working in the UK as a Runner and PA. She worked on two of the Star Wars prequels before setting up Sindbad Productions with her Tunisian partner a decade ago.

Through Sindbad Productions Philippa provides services for all sorts of productions, as well as producing her own films when time allows.

What can you tell me about the region you cover?

We cover Tunisia only, although we did get involved with a lot of news programmes in Libya last year during the revolution. Tunisia is a country about the size of California with a tremendous variety of scenery like forests, mountains, beaches, desert, industrial landscapes and souks (an open-air market).

There are many hotels and good infrastructure due to the well-developed tourist industry. There is a small number of really excellent crew and as a company we make a conscious effort to hire young people if we possibly can, even if this means training them up ourselves on our own productions.

Sindbad as a company has large office space, a costume and props warehouse, and a fair bit of film equipment. We also have an in-house post-production suite.

What kind of places has Tunisia doubled for?

In the past Tunisia has doubled as Europe, Italy, the Gulf region, Egypt, Pakistan, Iraq, Afghanistan and others. Our most frequent requests are ancient Rome and the Holy Lands, as well as locations for war pictures.

We have a wonderful amphitheatre a couple of hours south of Tunis and many Roman sites set in empty landscapes that are popular with filmmakers as they are relatively accessible. There are several forts around Tunisia that serve as a great generic backdrop for period pictures and factual dramas.

There are several forts around Tunisia that serve as a great generic backdrop for period pictures and factual dramas.

We have a brand new airport that we have been filming in a lot recently that can double as an Arab and European or US location. They are really welcoming to film crews and very flexible.

I remember difficult moments rather than difficult productions. In all honesty the hardest productions are the ones where I learnt the most so I can't really see them in negative terms.

The best anecdote was on a commercial we did for a Hungarian company. The Hungarian production designer was really finding communication difficult and frustrating, and kept swearing at the Tunisian crew. In turn, the Hungarian woman producer could see that someone soon was going to react negatively to her aggressive attitude. She took the designer aside, accused her of sabotaging her production and punched her right in the face! Everyone was really well behaved after that...

It’s mostly TV for the BBC and other UK production companies. We get more and more work from other countries now such as Holland and Eastern Europe. It is hugely varied though and seems to go in waves. There were a couple of years where all we did was factual drama. Now it's more TV drama and low-budget features.

The Hungarian woman producer could see that someone soon was going to react negatively to her aggressive attitude. She took the designer aside, accused her of sabotaging her production and punched her right in the face!

Are there any tips that you would like to share with our audience about filming in Tunisia?

It is really very simple to film in Tunisia as long as we get the right people working on the crew and have time to prepare the project correctly. Once you make a decision on your local service provider, try and work in partnership with them. Every country has its idiosyncrasies and they are the best people to help you avoid unnecessary problems.

The other thing is that Tunisians really like to do business in person. No amount of emails can replace one face-to-face discussion and a handshake, so use more location people and fewer PAs. 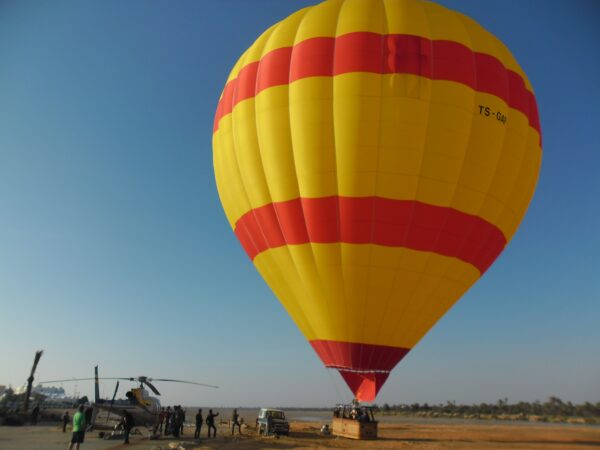 Tunis and Tozeur are geared to film crews and as long as the crew has a carnet in place and a local partner sorting out paperwork the customs procedures are straightforward. Avoid bringing in lots of consumables as they can be heavily taxed, especially as almost everything can be sourced locally nowadays.

We really like the Golden Tulip near Tunis as it offers both luxury and comfort without being too stuffy when a film crew arrives at 3 am with 30 items of luggage wanting to prop up the bar. There are a couple of hotels in Tozeur that we really like as well mainly due to their flexibility and warm welcome. We try and avoid the really large all-inclusive hotels dotted all over the country as they tend to be impersonal and not at all film-friendly.

Local insurance is available and affordable but as it is not a hugely developed industry in Tunisia we can find it hard to find the sort of insurance premiums that US companies require.

No amount of emails can replace one face-to-face discussion and a handshake, so use more location people and fewer PAs.

What would you recommend crew and cast do to have fun and relax in Tunisia?

Go to a Hammam, enjoy some grilled fish in a restaurant overlooking the Mediterranean, go shopping in the Medina, or just sit in a café and watch the world go by.

What do you do to find peace of mind after a full-on location shoot?

I usually go back to the UK with my children to see friends and family, and sit around drinking endless cups of tea. Bliss!