Written by Murray Ashton on Aug 21, 2012. Posted in Interviews

Rita was born and raised in Lebanon, and worked as a literary books translator and interpreter before studying for a Masters degree in production.

She joined the advertising business seven years ago, and has been heading the Middle East operations of Joy Films for the past four years from offices in Dubai and Beirut. 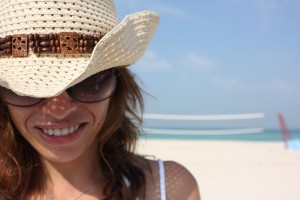 I have filmed in Thailand, South Africa, Prague, Slovenia, Turkey and Morocco.

Every time you shoot abroad you need to dig deep, find out as many details as possible in the bidding process and understand how things work internationally. Ask all the questions that cross your mind and don’t worry if they sound stupid. Knowledge is your best ally in a foreign territory.

I also recommend you inquire about places and things of interest for yourself and your clients, rather than relying on the servicing company to offer you the obvious. Try to make your trip productive and interesting at the same time.

Are there any production service companies who you would like to give a special mention?

We shot a TV commercial in Slovenia towards the end of February. We had a very limited budget and an ambitious script to shoot at the top of the highest summit in the Julian Alps. We hired Mangart, a small production company in Lublijana, and their producer Saso Kolaric was amazing in finding all the solutions. We had helicopters transporting us to a military meteorology base, Gregor Kresal and his climbing teams, and the camera crew were fantastic. We had good experiences in other countries with other production companies, but this was definitely the most outstanding and most unforgettable one.

What has been your hardest on location challenge?

Shooting in Dubai in August in the middle of the desert with temperatures reaching almost 53 Degrees Celsius was a challenge. Our mobile phones and zoom lenses were melting, it was almost impossible to breathe and on the last day of that production we had to drive 350km in one day on location moves. Having a great director and a professional team on board made it feasible.

I like filming in Lebanon because we have a surprising pool of diversified talent and locations. Within a one-hour drive you can go from rocky or sandy beaches to green or snow-covered mountains depending on the season. The weather is Mediterranean; there’s sunshine almost all year round with mild temperatures. The crew are experienced and have a positive can-do attitude. It’s also a fun place to be. Agencies and clients always have great results and a great time.

It was the Mobily shoot in Slovenia. We had a very small budget, we shot with minimal crew, created snowstorms using the choppers that took us to the top of the mountain, and eventually the film looked like a big production and not the small one that it really was.

I am a mother of two and when I am on a production I spend a lot of time away. I leave home before they wake up and return after they go to bed. Spending time with my babies with my phone off is my favourite way to relax now.