Samsara: Filming a 65mm visual epic on location across 25 countries

Samsara is the new feature from Producer Mark Magidson and Director/Cinematographer Ron Fricke. It was shot in 25 countries over a five-year period and its UK release date is August 31st 2012.

The film has a non-narrative structure – ‘samsara’ means ‘cyclic existence' – and is presented without dialogue or narration, putting the visuals and score front and centre. Production began with research into the specific visuals they wanted to capture. Magidson explains: “We spent a lot of time researching the locations that would give us the kind of images we were looking for. This involved a lot of online research and once we’d identified where we wanted to go the local service providers we were working with could make their recommendations too.”

Each location was filmed as a separate trip, with the team returning to the US each time to regroup and plan their next move. They travelled in a small production team of just four or five people and made the decision early on to film on 65mm film (later printed on 70mm) to get the most of the spectacular visuals.

Obviously digital technology has advanced a lot in a few short years, so if we’d started this project in 2012 we would have seriously considered shooting digitally rather than on film.

Magidson explains: “The production was filmed over five years and we chose to shoot on 65mm film because digital technology wasn’t advanced enough in 2007. When you shoot on film you have to make sure you’re shipping the footage back with a company that doesn’t use x-rays.

“Obviously digital technology has advanced a lot in a few short years, so if we’d started this project in 2012 we would have seriously considered shooting digitally rather than on film.” 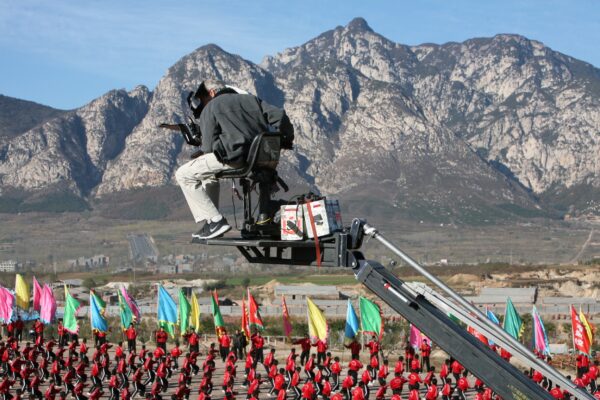 The 65mm camera equipment weighed in at about 1.2 tonnes and they took with them 30 feet of dolly track broken down into five-metre segments. Given the sheer bulk of the camera equipment, improvised handheld shots were never a real choice.

Local service providers sorted out filming permits for regional landmarks and historical sites. Many of these places – such as the Kaaba in Mecca and the Basilica Di San Pietro in the Vatican - are not normally open to filming and access sometimes took a long time to negotiate. Magidson and Fricke’s trump card was that their film was celebrating the beauty of the ancient world and its architecture and the lack of controversy worked in their favour.

Majestic aerial shots of temples in Burma (now also known as Myanmar) and the Emo Valley in Ethiopia contrast sharply with scenes of pig and chicken farming in China, which are among the film’s more challenging images, especially for Western audiences. The filmmakers worked with Beijing-based Ten Eighty Productions to arrange access to these plants.

We went through high-level contacts that come with long experience of working in China; normally these places wouldn’t be open to film crews.

Noah Weizweig is a Producer and Owner of Ten Eighty: “Ron and Mark were looking for footage of industrialised China, which led us to the chicken and pig plants that appear in the film. We had to negotiate very carefully to get access to these plants, but we went through high-level contacts that come with long experience of working in China; normally these places wouldn’t be open to film crews.

“They let us in partly because of pride. They even wanted to include their company logo in the shots at the pork factory. Of course the reality is this was a naive response when it comes to being viewed by a Western audience. Chinese companies are relatively new to the [filmmaking] scene. They have a lot to learn about PR and the dangers of sharing too much with the public.” 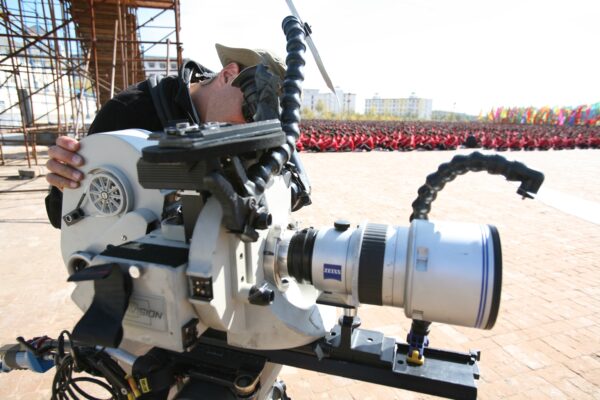 Weinzweig was also involved in attempts to film in North Korea. The notoriously secretive state holds large-scale stadium games every summer that Magidson and Fricke were very keen to film. They got as far as arranging a scouting trip to capital city Pyongyang where Weinzweig observed smaller-scale parades and was able to plan potential camera angles for the shoot. Unfortunately this leg of the shoot was cancelled by North Korean authorities shortly before the planned start date as relations with the US soured.

Samsara squeezes an epic world view into a 100-minute timeframe and as a result some parts of the world get more screen time than others. A Native American ruin in Arizona involved some four hours of hiking for a scene that lasts less than ten seconds in the finished film. The result, however, is a stunning visual showcase of the hustle, bustle and beauty of the world today.