Smuggler in London has staged a slackline walk with a difference in Croatia for Volvo Trucks. Slacklining involves walking over a nylon line usually tensioned between rocky outcrops, but this time the stunt has been done at speed, with success partly dependent on precision driving. 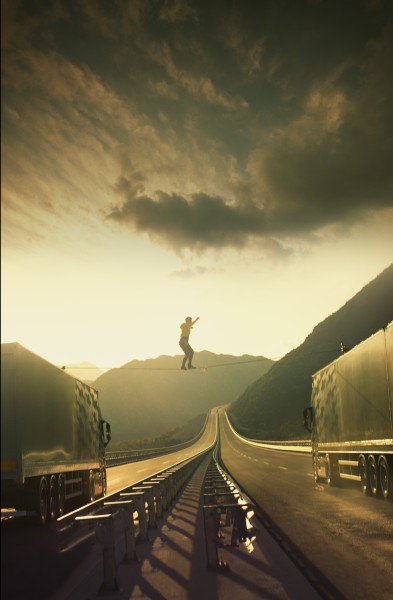 Taking a documentary approach that emphasises the drama, the spot shows veteran slackliner Faith Dickey crossing between the two trucks as they drive along an unopened highway in Croatia.

Dickey has the world record for the highest slackline crossing at 1,200 metres. Here she has to combine balance with speed as she makes the crossing before the trucks disappear into twin mountainside tunnels.

The team considered locations in Spain but ended up choosing an unopened highway in Vrgorac, southern Croatia. Björn Engström is a Copywriter and Senior Partner at agency Forsman & Bodenfors: “We wanted to do this for real and so did the director Henry Alex Rubin. He’s not the kind of person that compromises on anything, so he got in touch with the very best Hollywood stunt people.

“The team practised a lot - even in wind tunnels - before we went on location. But if it wasn't for world-record-holding slackliner Faith Dickey (and the Volvo FH trucks of course), it wouldn’t have been possible. Faith is truly amazing.”

Stunt Co-ordinator Peter Pedrero, a veteran of big-budget film franchises like James Bond and Harry Potter, was brought on to oversee the stunt. Cameras on the back of one of the trucks, as well as miniature cameras on the cable and on Dickey's helmet caught the action, with a circling helicopter capturing aerials.