Shadowy streets and established London landmarks are the setting for What’s Inside, a new Gatorade spot featuring sprinter Usain Bolt. The ad from Los Angeles-based Untitled shows a hooded man walking through the city, before Bolt reveals himself in the Olympic Stadium.

Filming took place for two days in London. Agency TBWA\Chiat\Day had a solid idea of the visuals they wanted to get and Untitled worked with Mad Cow Films in London to make the final decisions. 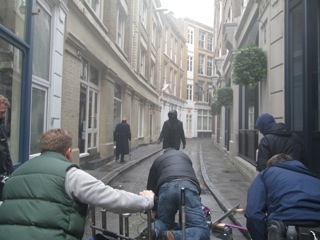 Jay Kelman produced the spot for Untitled: “We wanted famous landmarks visible in the frame to give a clear sense of place, but at the same time we didn’t want a picture-postcard image of London.”

Sarah Patterson was Executive Producer with the agency: “The agency supplied a detailed brief with reference photos. Mad Cow then provided a wide range of locations based on the logistics of what was possible to shoot in two days.”

Mad Cow’s work involved sending out scouts a few weeks before the shoot to look for the best spots that would look good in specific light conditions and then they shared their recommendations.

Jonas Blanchard was service Producer for Mad Cow Films: “Local city councils were very helpful. We ended up with permits for more locations than we were probably going to need, but that helped us prepare for any changes. The directors came over to London about a week before the actual shoot and we went through the long-list of locations.”

We wanted famous landmarks visible in the frame to give a clear sense of place, but at the same time we didn’t want a picture-postcard image of London.

As in many major cities around the world landmarks in London often charge location fees if they’re to be specifically featured on-screen, but these fees don’t apply if the landmarks only appear in the background of a shot. Filming also straddled a weekend so that locations in the City of London were a lot quieter and easier to shoot.

Usain Bolt’s reveal was filmed on location in Jamaica during a day of shooting, with a double used for the London-set scenes.