Amsterdam-based production company Bonkers has taken to the ocean off the coast of Miami in a new comedy spot for insurance firm Centraal Beheer Achmea. A speedboat driver flirts with his scantily-clad companion, before a wacky accident leaves them both flailing in the sea.

Filming took place in Florida because the production team had already been shooting in the US for another spot and Miami was the most convenient location. The actual setting is intended to be a generic summery spot with a Spanish feel. A sheltered bay in Miami proved the best choice for the shoot.

We filmed on Biscayne Bay where there’s a shallow lagoon sheltered from the open ocean that’s good for filming. The water here is very shallow – only waste-high in fact.

Jan Jinek produced for Bonkers: “We filmed on Biscayne Bay where there’s a shallow lagoon sheltered from the open ocean that’s good for filming. The water here is very shallow – only waste-high in fact – so we planned around that in picking the right boats for the conditions, for both the main vessel and the support boats. 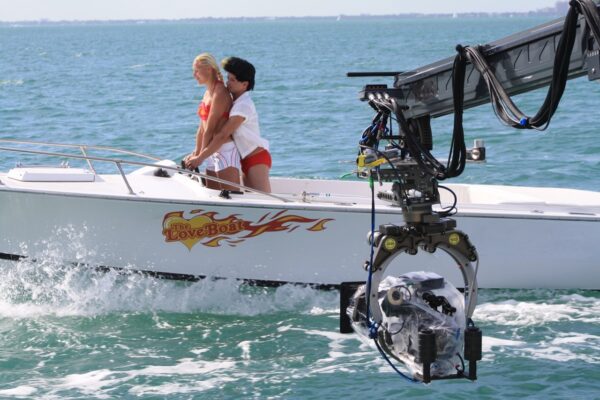 “Deciding which boat to use as the star actually took around a month, although everything in the region is built to similar specifications.”

A large catamaran was used for the crew and from here they anchored a camera crane. They got lucky with the weather, enjoying days of bright sunshine after several previous weeks of rain. One of the biggest challenges came towards the end of the shoot when the speedboat’s engine failed.

Jinek adds: “Repairs were taking too long so we ended up filming the speedboat being pulled by a support tug and then painting out the cable in post. By that point we’d already got the shots we needed to establish the boat’s speed so it wasn’t too much of a problem.”

Extra post-production work involved giving the lagoon water a darker colour and painting out the land on one side to create a horizon, all of which gave it the appearance of a deep open ocean.

Biscayne Bay has been used as a filming location before, by the likes of Italian fashion brand Freddy.