Written by Murray Ashton on Sep 11, 2012. Posted in Interviews

Shayne started out as a receptionist 15 years ago for a local director-based company and was co-ordinating jobs within a month. As Head of Production at Moonlighting Commercials, Shayne oversees all projects, from budgeting and prep to shooting, and manages a fantastic research and production team. 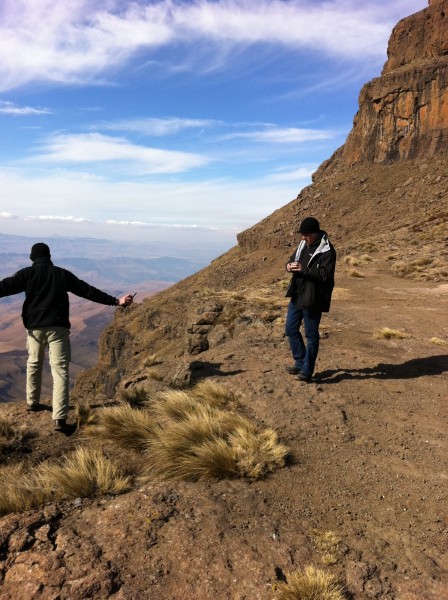 What can you tell me about South Africa as a filming location?

South Africa (SA) has an extensive range of locations all within about two hours of a major city. We work mostly out of Cape Town but also a lot up in Johannesburg and occasionally Durban and surrounds. We can pretty much replicate anywhere in the world with our houses, countryside, beaches, mountains, lakes, streets and cities. Locations (along with climate, cost, crew, talent etc) are one of the main reasons that SA and Cape Town in particular has become such a hot spot for international service work.

Our infrastructure is world-class, proven by the calibre of productions that come out here. Our crew are among the best in the world and constantly benefit from skills transferred from the international long-form projects that shoot here. We have a wide pool of talent which is increased from October to April when many of the world’s models come and base themselves here for our season.

We have a wide range of studios and are benefitting hugely from the recent addition of the Cape Town Film Studios – four sound stages that complete our offering as a world-class film destination. Our sister company Moonlighting Films recently shot The Borrowers for Working Title Television.

We shoot a lot in residential houses in and around Cape Town, from very modern to classic. We film green belts and gardens, beaches, our sand dunes, downtown city streets with a lot of car shoots and lock-offs at weekends in both Cape Town and Johannesburg. We’re shooting more and more in the Cape Town Film Studios, as well as the smaller studios, and in many instances clients will not go on location at all and shoot in studio for the production value.

We have a wide range of studios and are benefitting hugely from the recent addition of the Cape Town Film Studios – four sound stages that complete our offering as a world-class film destination.

What are the more unusual locations in South Africa that our readers would not necessarily associate with the country?

It is always a frustration that 95% of South Africa is not used from a locations point of view. Cape Town tends to be the location of choice for international commercials because it can replicate so many countries of the world and it is generally hot, dry and sunny when it is the opposite in the northern hemisphere. It’s also convenient with a huge industry infrastructure.

However there are wonderful locations that fit the description of exotic - in our world this means not having to necessarily replicate our clients’ home environment. These locations include the mangrove swamps in the Eastern Cape, the forests and deltas in the Transkei, the vast karoo areas that replicate the Arizona desert, the Nanhua Buddhist Temple outside Pretoria and the incredibly rugged but accessible mountain ranges with snow in the Lesotho highlands.

Areas that we have filmed in very successfully but that are underexploited are the mainland and islands of Mozambique and Okavango swamps in Botswana. While Moonlighting shoots extensively for feature films in Namibia, this is scarcely used in the commercials world.

I was filming a five-day car shoot in the Salt pans in Verneukpan about eight hours from Cape Town. We had very tight budget constraints which would not allow for building the necessary tented camp to accommodate the crew of 50 so we ended up having to drive the crew in and out every day - 90 minutes each way - across volcanic shards of rock that would slash our tyres, and which then meant getting vehicles to Uppington for repairs. Added to this was that there was no cell phone reception on the pans either.

If you’re shooting in the salt pans and it rains you’re stuffed; you walk and pull up 20 cm of mud. On the fourth day it rained and we had to start evacuating.

We had five prep days in the pans shooting eight hero cars. If you’re shooting in the salt pans and it rains you’re stuffed; you walk and pull up 20 cm of mud. On the fourth day it rained and we had to start evacuating. Our clients were very keen to go back and investigate and got stuck! We had to rescue them by tractor! We had to rescue our crane and some trucks about two weeks later!

I work on commercials of all media types and a few documentary and stills productions as Head of Moonlighting Commercials. Our sister company Moonlighting Films works on feature films, TV and documentaries. The companies work side-by-side and benefit each other in aspects such as our location database, rates (economies of scale), experience and knowledge.

Recent productions include commercials for Magners (Outsider in the UK) and Banana Boat (Sandwick in the US), and a digital campaign for Ford Ranger (Gorgeous Films, Sydney). Features include Safe House, Invictus and The Borrowers.

Are there any tips you can offer about filming in South Africa?

As most commercial production is concentrated in the six hectic months of summer there is a huge demand on resources, so the longer the pre-production time can be stretched the better, especially when there are a lot of locations involved. For us we feel that great production is a given and that clear communication is the key to a successful shoot.

Which foreign producers and production companies have you most enjoyed working with over the years?

Oooh, that’s a tricky one! We have some wonderful clients and I’m a diplomat! I guess I can pick out a few directors who I’ve come to know really well. Jerker Josefsson at FilmbyUs; Henry Littlechild at Outsider; Stephen Meade at Short Films and I spent an hysterical few weeks last August travelling through Kwa-Zulu Natal with Rowan Webb from Sydney’s Gorgeous Films shooting digital footage for the new Ford Ranger.

We’ve been using the Pepper Club and The Taj hotels a lot this season. They’re both in downtown Cape Town and really accommodating to the demands of film production. Hippoboutique is always great. Mount Nelson is always a favourite, especially for our US and UK clients.

Costs are pretty much in line with other parts of the world although we find that our deductibles (excess amounts) tend to be much lower.

As for wrap parties, it depends on how many we’re catering for. Ranges from a big braai at Philip’s house (owner of Moonlighting) to maybe drinks at La Perla in Sea Point. Trinity has a great roof top area; so many great options!

There are three basic insurances that we take on to protect both ourselves and the client. The first is short-term and includes crew for personal accident, death and disability, motor vehicles, cash and office contents.

Next comes all the liability insurances that protect the SA company and therefore the foreign company which include employers liability, public liability and third party damage.

Lastly we take out a film producers’ pack which has various levels of cost depending if this is taken as full ‘negative’ cover or a reduced version of this that insures against extra expense, props sets and wardrobe, key cast and crew, and various other smaller items.

Costs are pretty much in line with other parts of the world although we find that our deductibles (excess amounts) tend to be much lower. In fact we often reinsure the deductible amounts on behalf of foreign companies to reduce their exposure there.

For those who have not done it, I will always encourage clients to take a safari if they have the time. There are so many wonderful lodges and they always have an amazing time, whether they go within three hours of Cape Town or up to Port Elizabeth or Mpumulanga.

Within Cape Town you can’t beat some of the wine estates for long lazy Sunday lunches in a stunning setting. We often take them to The Old Biscuit Mill for a fab Saturday morning market.

After a full-on location shoot what do you do to relax? Where do you find peace and quiet?

I guess ‘peace and quiet’ is relative when you have three sons aged between two and 17! My favourite place to eat is Nobu. Still thinking about the Peace and Quiet bit! A spa...!

(Desert photo with jeep and helicopter courtesy of Frans Marais)