Written by Murray Ashton on Sep 6, 2012. Posted in Interviews

Bruce has lived all over Canada. His father was a Builder and Developer and as a teen he worked on construction sites in the summer. Film production felt instantly familiar to him and finding the right location to film was a quick way into the business. Bruce has been a Location Manager for 23 years. 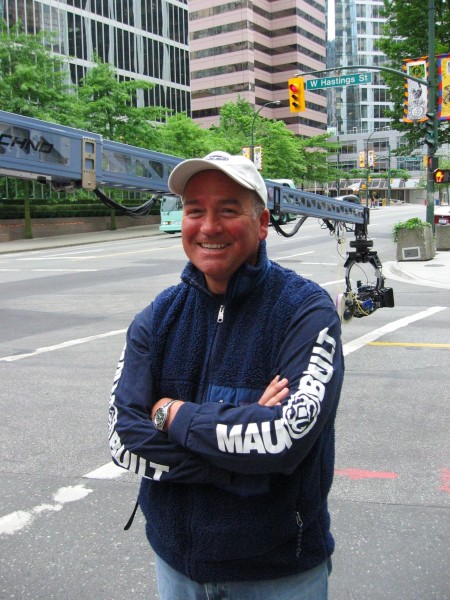 What’s the specific region you cover?

The bulk of my career has taken place in British Columbia - Vancouver specifically. Vancouver experienced a boom in production from the mid-1980s. On any given day I may be asked for a modern office tower, a Victorian mansion, a glacier in August with easy access or a pristine forest in the studio zone.

Vancouver has many crews and equipment houses, five major stage complexes and many post-production facilities. It also has a sizeable animation and computer gaming industry.

Vancouver has many television series that film here so the everyday locations of homes, apartments, offices, streets, shops and the like are always being filmed. On any given day driving through Vancouver you will see a company filming something. We also get large US-based feature films that come for the landmark locations or stages.

British Columbia has many distinct geographical regions that range from the cutting edge architecture of Vancouver to 'cowboy' looks just an hour away. The most northern end of the Sonoran Desert is an hour east of Vancouver. Of course we also have mountains, forests, glaciers and rugged coastline. British Columbia is four times larger than Great Britain.

British Columbia has many distinct geographical regions that range from the cutting edge architecture of Vancouver to 'cowboy' looks just an hour away.

I was asked to do a movie in Budapest, Paris and Monte Carlo; we had to find a Texas suburban home, diner and High School while there and it was a real challenge. We found what we needed but it felt like I drove up and down every street in Budapest and the surrounding area. It was a challenge to express what constituted a Texas suburban home and explain it to the scouts. In the end I used flash cards generated from research.

I began my career in episodic television doing the MacGyver show for Paramount. That was my film school for four years working with talented people and learning the ropes. I always had my eye on feature films and gradually made my way to work on them whenever possible. I also scout for commercials and specialise in knowing western Canada beyond simple city locations. Lately I have been scouting and working in Eastern Europe as a Supervising Location Manager.

Working in western Canada is very straightforward. Check the weather depending on where you are going and when you plan to film. Also, depending on the time of year you film be aware that during summer the hours of daylight are very long and the opposite is true in the winter. The infrastructure is excellent and Vancouver is world-class as a base from which to work. If you are coming here to work you will need a work permit so have the local Production Co-ordinator make the arrangements prior to arriving.

Vancouver International Airport is modern and easy to use. From there you can fly to any part of the province. Depending on the project we have many types of aircraft available from helicopters to float planes.

What are the most film-crew friendly hotels in your region and what is your favourite wrap party venue?

There are many film-friendly hotels, apartment hotels and the like. There is a bounty of choice to suit everyone. I like wrap parties at the Vancouver Aquarium.

In the city of Vancouver CAD3 million general liability is required, though most production companies carry CAD5 million to CAD10 million. In some jurisdictions they will have your insurer complete a form that specifies the insurance required. Most property owners are knowledgeable in asking for correct and comprehensive insurance.

In my time off I travel either by aircraft or motorcycle. I enjoy being on the road and seeing new things. There are so many things for visitors to do in British Columbia, from fishing and sailing through to golfing, hiking and shopping. The great outdoors is the biggest draw.

To find out about Bruce's experiences filming The Grey click here.