Climbers David Lama and Peter Ortner set out to scale renowned peak the Trango Tower in the Karakoram range that straddles China, India and Pakistan. The trip was a joint venture between Mammut and Dedicam, a Swiss company that specialises in filming using RC helicopters. Corey Rich Productions is involved with New York-based multimedia company Novus Select.

The biggest challenge going to Pakistan actually was the logistics of trying to get the amount of equipment we needed through Customs, through the city, to [the town of] Skardu, into jeeps and then eventually deep into the Karakorum Mountains.

Pakistan is certainly not known for being a film-friendly production hub. Perhaps predictably, one of the biggest issues was simply getting to the remote locations where they’d be filming.

Rich offers: “I think the biggest challenge going to Pakistan actually was the logistics of trying to get the amount of equipment we needed through Customs, through the city, to [the town of] Skardu, into jeeps and then eventually deep into the Karakorum Mountains, which are some of the highest and most rugged mountains on the planet.” 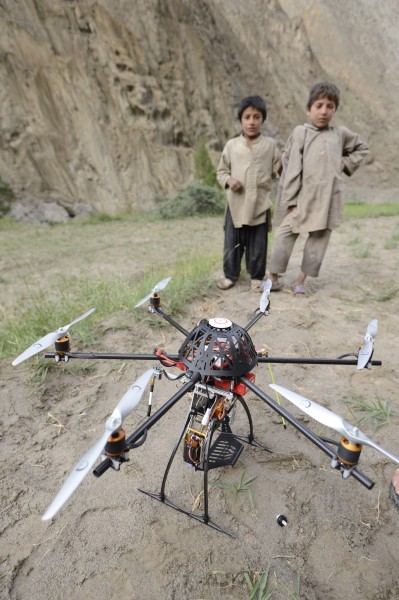 There is no dedicated production support locally. However, Rich arranged assistance from trekking agency Shipton Treks & Expeditions, who stayed with them from their arrival in Islamabad through to Base Camp on the Baltoro Glacier, deep within the Karakorum. From here it was just Rich, his assistant Andrew Peacock, the athletes David Lama and Peter Ortner, and Remo Masina of Dedicam who operated the helicopters.

Getting the helicopters themselves into the country proved something of a lottery. The team brought two on the plane as ordinary luggage, neither of which was ever checked by airport authorities in Pakistan. A third was shipped from Europe, but was confiscated in Islamabad and in fact still hasn’t been returned.

Rich admits to being sceptical from the outset about whether the helicopters would work, but he needn’t have worried. The devices are operated from the ground using a handheld control panel.

Masina comments: “We made these helicopters more lightweight and with more propellers so that they would work in the high altitudes of Pakistan. We have what’s called a First Person View video feed mounted inside ski goggles that allows me to see from the helicopter’s viewpoint using the onboard camera.

“Battery time is short – only a few minutes - and you also have to factor in the time it takes to fly to and from the actual filming location.”

We made these helicopters more lightweight and with more propellers so that they would work in the high altitudes of Pakistan.

Rich recalls: “Simply co-ordinating the shots was a big challenge from a director’s and climber’s standpoint. When the athletes and I were up on the Trango Tower - way off the ground on a vertical rock wall – then the logistics became complicated.

“It was challenging for Remo to even find us on the wall as he was flying the helicopters from almost a mile away. There was a lot of communication and anticipation via radio as to when we would fly.”

Flight-time was more restrictive than they would’ve liked because they’d lost some of the batteries with their confiscated baggage. Two generators rated for operating at high altitudes – Base Camp was above 14,000 feet – provided power and were used to charge the batteries they had.

Pakistan’s image in recent years, especially in the more remote tribal areas, has been coloured by insurgent activity and it’s a region that’s regularly patrolled and engaged by unmanned US military drones. Rich had certainly considered all the bad press in the planning stages, but it didn’t impact on his own time in the country: “Was it safe?" he asks: "Well, I think sometimes mass media portrays Pakistan in a pretty negative light, whereas the reality was we only had fantastic experiences.”