Written by Murray Ashton on Oct 4, 2012. Posted in Interviews

Filming on location in the Bahamas with Film Commissioner Craig Woods

Craig Woods is Film Commissioner at the Bahamas Ministry of Tourism. The Bahamas is part of the British Commonwealth and encompasses 700 Caribbean islands, of which 30 are inhabited. Craig is in charge of promoting and arranging film shoots in the region. 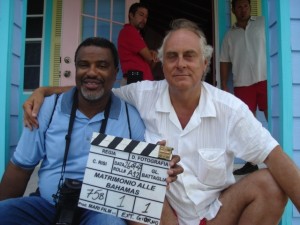 What can you tell me about The Bahamas as a filming location?

The island of Bimini is the closest to the US mainland, located just 50 miles of the east coast of Florida, and has a population of 310,000 people. With all the islands put together, the Bahamas is about the size of Connecticut. We can crew up to one full filming unit co-ordinating through the Bahamas Film and Television Commission (Craig is on the left in the photo) and we have directors who have worked on films that have appeared on the Showtime Cable Network in the US.

Because the Bahamas dominates the ‘hot’ look better than most countries in the Caribbean, it has an abundance of beach and hot-spot locations. There’s the Island of Eleuthera, where Fool's Gold was shot, Exuma & Freeport, where two Pirates of The Caribbean films were shot, Nassau and Paradise Island where Duplicity, Casino Royale and After the Sunset were filmed, and Bimini, where the closing scene for Silence of the Lambs was shot. We shot our first Bollywood film in 2008.

The rare locations in Bahamas would be the abundance of inland Blue Holes on Andros Island, Pink Sand Beaches on Eleuthera and Harbour Island, Flamingo Colony on the Island of Inagua and Allen's Cay, Exuma Iguana Colony.

MGM took a tank used to hold a million gallons of molasses for rum-making. They turned it into a water tank to stage an underwater fight with Paul Walker and Josh Brolin in a DC-3 aircraft with the wings detached.

Into The Blue was the most challenging film shoot. MGM took a tank used to hold a million gallons of molasses for rum-making. They turned it into a water tank to stage an underwater fight with Paul Walker and Josh Brolin in a DC-3 aircraft with the wings detached. 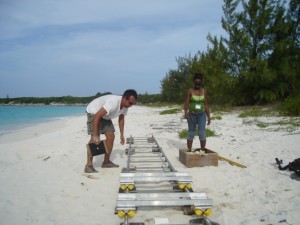 The Bahamas is engaged in more commercial productions from the big production companies in the US and Canada. The most recent feature film was a part of a science fiction film with William B. Davis from The X Files and director Austin Hines, from Salient Clear Production in Vancouver, Canada.

Are there any tips that you would like to share with our audience about filming in the Bahamas?

Some special tips for filming in the Bahamas which is a strong feature is the Bahamian currency, which is on a par with the US dollar; there is no need for US currency exchange. The Bahamas Film Commission works closely with film companies to facilitate their immigration process.

The Bahamas is a country of multiple islands so it is best to check with the film commission to verify the island locations and airports to fly to. However, there are non-stop flights from London, Canada and across the US. 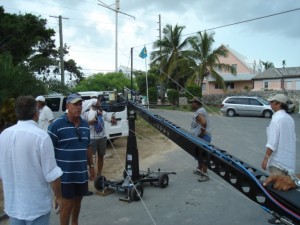 All of our hotels in the Bahamas have some sort of production crew lodging. The brands which have been the more aggressive in getting film, television and commercial productions include Sheraton, Atlantis, Hilton, Abaco Beach, Sandals, Breezes and Comfort Suites.

There is no set policy on location insurance. If the production company uses a Government location, the task of the film commission is to negotiate a location fee waiver depending on the location being used.

For locations which are a part of the Museums, Monument and Antiquities, there is a normal fee of USD1,000, this too can be influenced by the film commission; the appropriate Government agency will carry insurance coverage for its location. As it relates to private locations, this is the responsibility of the owner of the production company to purchase some kind of liability insurance to protect their interests.

Because we offer the hot spots better than any other location in our region, we always encourage crews to engage in beach and water-sport activities.

Because we offer the hot spots better than any other location in our region, we always encourage crews to engage in beach and water-sport activities. Also the Bahamas has unique forests, creeks and old-world colonial architecture.

I usually go for a swim with my three granddaughters; one is a ninja, she is a karate-do student at four years old!