UK-based Rattling Stick has filmed a series of commercials for AXA Insurance on location in Sri Lanka. The spots follow a man mastering how to ride an elephant as a metaphor for promoting lower insurance costs for experienced motorists.

[The] main actor came from South Africa and he came one week before in order to train with the elephant and get used to her.

The availability of an elephant used to the filmmaking process played a major role in Sri Lanka winning the project. Sigithi was already a veteran of commercial production and even a feature film, which helped when it came to surrounded her with lighting and camera equipment, as well as the crew. 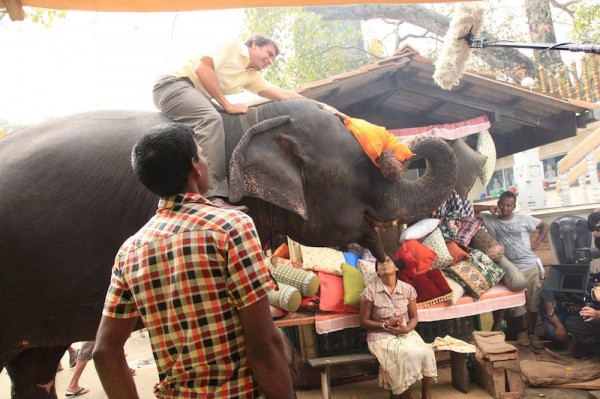 Priyanga T Kumarasiri produced for Crew For Shoots in Sri Lanka: “[The] main actor came from South Africa and he came one week before in order to train with the elephant and get used to her.

“He was feeding, bathing and spending the whole day in the vicinity of the elephant. So the elephant got very friendly with him and got all the required actions trained with the actor, obligating to his commands.”

A decent pre-production time was needed to make time for a comprehensive medical check-up to ensure the elephant was fit and healthy to appear on-screen. The three-day shoot then took place in Galle in southern Sri Lanka, with road closures creating a more controlled environment.

Equipment is scarce in Sri Lanka, but the production team managed to import what they needed. Priyanga adds: “Fortunately we got one brand new Alexa which had just come in to India at that time. Also we got a Megamount crane head from South Africa. All this equipment came on a carnet and it’s very easily handled by our clearance manager.”