Written by Murray Ashton on Nov 15, 2012. Posted in Interviews

An Iceland native, Einar has been the Icelandic Film Commissioner since 2004. The Film in Iceland project was started in 2002 when Iceland decided to launch its filming incentive programme to help stimulate its vibrant film industry. 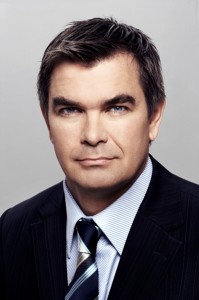 What can you tell me about Iceland?

Iceland is very diverse and renowned for its natural beauty. One of the country’s strengths when it comes to filming locations is the variety of scenery you can get without having to travel far. Ease of access is the key. You can reach geothermal areas, majestic waterfalls, barren highlands, stark mountains and glaciers only a short distance from the main roads and all modern facilities.

We have several quality production service companies with great experience in servicing foreign producers. Iceland has two rental houses that carry all the basic gear needed for filming. Framestore has had a post-production office here since 2008. There are two studios in Iceland; the Lazy Town Green Screen studio and Atlantic Studios, which also offers a deep-water swimming pool used for underwater shooting.

Well, ice and snow are very commonly used and the glaciers are popular. The alien and futuristic looks that Iceland offers in black-sand deserts (one of our trademarks), lava fields, geothermal areas and Sulphurous Mountains are also popular. Waterfalls are becoming more used and also the open spaces with nothing in the backdrop.

What are the more unusual Icelandic locations?

The city of Reykjavik, deep fjords in the Westfjords and the lakes we have all around. Then you also have great locations in the north and east.

What are your most recent productions?

Iceland is a very film-friendly country where you will find crew members with a can-do spirit. There is minimum red tape and Icelanders are very helpful. The weather is mild year-round with amazing light. It is only a two-and-a-half hour flight from London and a five-hour flight from New York. Medical services in Iceland are world-class and Iceland is a very modern society that embraces all new technology.

Which is the main international airport? Any tips on customs clearance?

There is one main Airport, Keflavik, only ten minutes from Atlantic Studios and 40 minutes from downtown Reykjavik. Due to all the experience of foreign film production the production service companies have good relationships with the custom clearance.

What would you recommend crew and cast do to have fun and relax in Iceland?

I relax with my wife and daughters at home, but I also recharge the batteries by going to the swimming pool, working out in the gym, skiing, cycling, hiking, fishing and hunting.

To the family summer house in the south of Iceland and salmon fishing in the Westfjords.