Written by Murray Ashton on Nov 14, 2012. Posted in Interviews

Filming on location in Peru and Colombia with Andrea Zarate

Andrea is an experienced journalist and moved to Peru in 2007 as a stringer for the New York Times. Her work quickly expanded to location filming fixer and line producer for TV and documentary filmmakers. Andrea is tri-lingual and works with clients from all over the world. 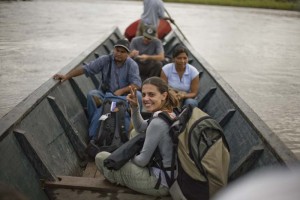 What can you tell me about the region you cover and the types of locations on offer?

I cover Peru and Colombia on a regular basis. The many location filming options include all sorts of ecosystems including jungles, the Andes mountain chain in Bogota, Colombia, the desert landscape of Lima and both the Atlantic and the Pacific Oceans.

Both Peru and Colombia are now hotspots for films and commercials, which is why the industry is well developed, so you can find anything you’re looking for. Peru is less expensive in terms of equipment rental and daily crew expenses, but both countries have all the necessary facilities needed like studios, post-production services, casting, lights and camera equipment.

What locations are most commonly used by film and TV crews in these regions?

In Lima the popular locations are landmarks that set the story, like the skyline as seen from the Pacific coastline. Many documentary filmmakers prefer to travel to the desert and the jungle, as stories are commonly about the environment, mining and social clashes. Peru is rich in anthropological and ancestral traditions. Many hot locations include Machu Picchu and the numerous archaeological sites there. Colombia’s Caribbean is also an interesting alternative because of the tropical landscape.

A yawning desert marks the entire Peruvian coastline and a few oases spring up suddenly, revealing remarkable little towns like Huacachina in Ica. The magical jungle in which most of the country is immersed and the Andes mountain chain give expression and bring character to any film. Colombia is no less captivating with its many developed cities like Cali, Medellin, Cartagena and its capital, Bogota.

The most difficult location was the coca-growing areas in Peru where the drug lords and guerrillas operate. The main challenge is personal safety. Another difficult location is shooting a documentary inside an airport, which not only requires numerous permits and security clearances, but also entails lengthy bureaucratic processes that are typical in Peru.

A yawning desert marks the entire Peruvian coastline and a few oases spring up suddenly, revealing remarkable little towns like Huacachina in Ica.

What type of productions do you work on most?

I’m a journalist and regular contributor for the New York Times and have shot multimedia for their online service. I also shoot for other news services, mostly online and TV. I work as a producer for documentary filmmakers and help with investigating topics, seeking sources, locations, and setting up logistics and planning.

I recently worked on a documentary shot in Peru about HIV and generic drugs entitled Fire in the Blood by Sparkwater Films from Mumbai, India.

Are there any tips that you would like to share with our audience about filming in Peru and Colombia?

Anyone bringing expensive equipment should keep in mind Peru is not a carnet country, but Colombia is. I would recommend having all your vaccines up-to-date, especially if you’re travelling into the jungle. You should have your yellow fever and tetanus shots.

Don’t travel with too much cash. ATMs here dispense US dollars and you can pay with dollars at most chain stores like supermarkets. Cell phones can be rented at the airport in the luggage carrousel and customs areas. Alternatively you can bring an unlocked phone with you and buy a SIM card or use prepaid calling cards for telephone service.

Do not take public cabs on the streets of Bogota or Lima.

Which are the best airports to use to film in your region? Any tips on customs clearance?

Jorge Chavez airport is the main airport in the capital city of Lima. In the next few years Peru will be modernising numerous airports in other provinces like Cusco, Arequipa, Chiclayo and Juliaca. Customs clearance depends on the type of visa you are carrying as well as any arrangements made in advance with SUNAT, the customs agent.

Colombia has well-developed cities and international airports in many cities as well.

Don’t travel with too much cash. ATMs here dispense US dollars and you can pay with dollars at most chain stores like supermarkets.

Radisson Hotels in Lima are reliable in terms of standard comfort for crews that need to rest between shoots. Their business centres help producers with any necessary materials needed. There are other great places like La Paz Apart-Hotel, which is in a good central area in the Miraflores district.

Lima has many great venues, especially restaurant and lounges. I would recommend Ayahuasca in the Barranco neighbourhood for drinks and Cala off the shore on the Green Coast for tasty seafood dishes and drinks.

Colombia has all hotel chains as well as boutique apartment hotels of all prices so depending on where the shoot will take place there are several to choose from. Bogota also has a vibrant nightlife and I would recommend Le Coq for a great wrap party.

In Lima, walking through the bohemian part of town also known as Barranco lead you into the old colonial streets where you’ll find art galleries and chic handicraft stores. Many foreigners love to buy trinkets for their friends and families. Miraflores also has a large handicraft fair where all sorts of Peruvian goods are inexpensive.

Bogota has a wonderful restaurant known as Andres Carne de Res in the city’s outskirts, so I would recommend taking a drive out there and checking out the scenery on the way.

What do you do to relax after a location shoot?

Lima’s oceanfront is inviting for anyone who likes to surf, paraglide or simply relax on the beach. Local surfer schools rent boards and wetsuits. I personally enjoy playing catch with my dog at the different parks along the Malecon that’s on the cliff.

In Bogota there are great inexpensive spa services that will provide a great moment of relaxation for tired crews.

Last December I took a month-long road trip between Argentina, Uruguay and Brazil with my husband.