HelliVentures Filmproduktion has shot a concert on the summit of Mont Blanc for the 150th anniversary of alpine clothing specialist Mammut. The film follows French singer ZAZ and her band as they scale the peak in the Alps on the French-Italian border.

We contacted a medical scientist to make a training schedule for ZAZ - she quit smoking and drinking, and trained for half a year.

The team faced all kinds of challenges from the outset. They had to figure out whether ZAZ and her band were physically capable of taking on the project, and then work out how to fit everything into the singer’s tight touring schedule. 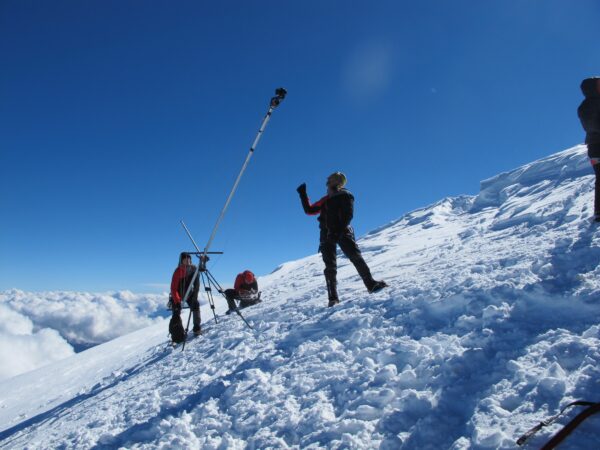 Joachim Hellinger owns Helliventures and directed the shoot: “To check ZAZ and her musicians’ physical condition we arranged a medical check and brought her to Munich to a high-altitude chamber. We had to figure out if she was in the condition to make such an extreme trip. After that we contacted a medical scientist to make a training schedule for her. She quit smoking and drinking, and trained for half a year.”

Determined to make the ascent without a helicopter, the team spent several days on the climb itself. On the final morning they were faced with fresh snowfall and temperatures of -17 Degrees Celsius; they started the last climb at 1am to make the summit in time for sunrise.

On the final morning they were faced with fresh snowfall and temperatures of -17 Degrees Celsius.

The singer and her band were accompanied by several guides, as well as a sizeable crew to carry all their supplies, including a portable camera crane amongst all their filming equipment. As with Mammut’s other recent shoot in Pakistan, Dedicam operator Remo Masina used a remote-controlled helicopter to film aerial shots.

When they reached the peak they could only hope for good weather – and low winds – while ZAZ needed to adjust to the cold, thin air when she sang.

“We were extremely lucky,” Hellinger recalls: “Half an hour before we reached the peak the sun came out and we had stunning weather.

“As for the performance on the highest peak in Europe, it is difficult to put it in words. ZAZ has such an impressive voice that even there her performance was stunning. To have her singing in these surroundings, with no one on the peak of Mont Blanc but the team and the musicians, was amazing.”

The full 13-minute film is being screened at the European Outdoor Film Tour. To find out more click here.