London-based OB Management took to the slums of Manila with a remote-controlled helicopter for a new music video from London quartet Rudimental. Not Giving In is based on the true story of Mouse, who avoided a life of crime by discovering a passion for break dancing.

The production team headed out to the streets of Manila and initially got caught up in local bureaucracy. They had set aside a four-day prep period but found a collection of local councils demanding permit applications and payments. The bureaucracy eased when Mouse himself arrived on location. 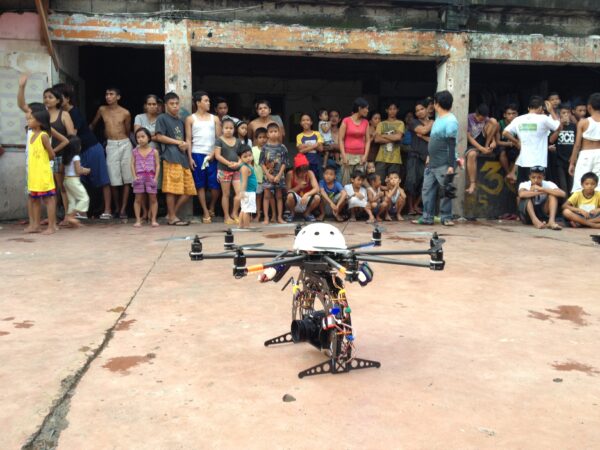 Tim Francis was Producer: “Luckily, as soon as Mouse arrived we were able to cut corners by approaching the Barangays (councils) ourselves. With a lot of politeness, patience and respect we made it work.”

Key to the shoot’s visual flair was the OctoCopter, a remote-controlled helicopter rig that was a two-person operating job. One person controlled the eight-motor flying platform and actually piloted the device, while another worked the camera rig attached beneath it and manipulated the shot.

Ben Keene runs Cloud 12 and was one of the OctoCopter operators: “For the Rudimental video the filming locations were chosen ahead of time so I spoke to the director to modify any potentially dangerous shots he might have had in mind.

“Safety was the main concern so I checked for any overhead cables and I had to figure out where to land after each shot.”

Safety was the main concern so I checked for any overhead cables and I had to figure out where to land after each shot.

A pair of lithium-polymer batteries gave the OctoCopter up to ten minutes at a time in the air and it didn’t go higher than 200 feet, although it could have done twice that quite comfortably. The device captured some impressive visuals, including one shot that hovers around the young Mouse in a full, 360-degree circle as he practices his dance moves, before the view suddenly lifted off into the air for an aerial view of the slum.

The OctoCopter travelled in a specialist crate that was flown as regular hold baggage. “Manila was the most exotic place we’d yet filmed,” Keene said, adding: “We don’t normally venture beyond Kent!”