Blink Productions doubled New Zealand for the English countryside in this year’s Christmas commercial for UK retailer John Lewis. The Journey features a snowman braving the elements as he travels to the city to buy some winter woollies for his snow-girlfriend. 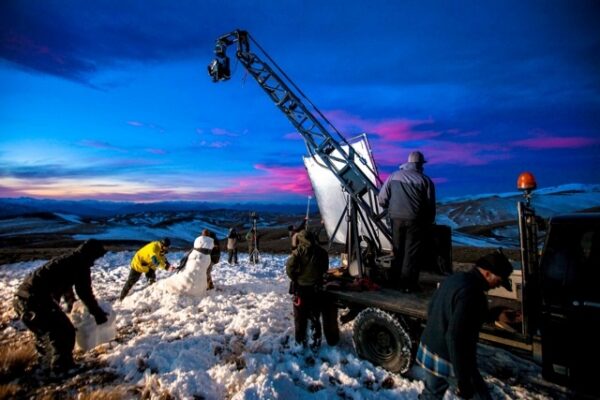 Filming took place at the height of the English summer so Blink took advantage of New Zealand’s southern hemisphere winter and headed to Queenstown on the South Island. The intrepid snowman never moves onscreen so he was built by model-maker Human Dynamo in Wellington.

George Mackenzie line produced for Robber’s Dog Films in Auckland: “The snow-people had a base plate weighted with a gripped bottom and holes to spike into the soft ground. The bodies were made up of two interchangeable moulded plastic/resin body balls, lightweight to allow us to transport them and durable enough to deal with the harsh elements.”

The snow-people had a base plate weighted with a gripped bottom and holes to spike into the soft ground.

The snowman also had interior ball and socket joints so that he could be made to lean forward, as though bracing against the wind and snow.

Downtown Auckland doubled for central London, complete with a red phone box and a black cab making a brief cameo. Filming took place on a Saturday night, with fake snow sprayed across the street to complete the Christmas effect.