In prehistoric times the cenotes on the Yucatán Peninsula in Mexico were used by the Mayans as dwellings, burial chambers and places for ritualistic sacrifice. They flooded several thousand years ago after the last ice age and remain of huge historical significance, with much remaining unexplored in modern times.

The cenotes were used by the ancient Mayans as dwellings, burial chambers and places for ritualistic sacrifice.

Blue Note Productions (with the involvement of co-producer KSM) spent a year of pre-production working with Chroma Media in Germany to develop the DeepSee-X 3D underwater camera that would enable them to explore. It was specifically designed to film in the cramped and dangerous underwater environment of the cenotes. 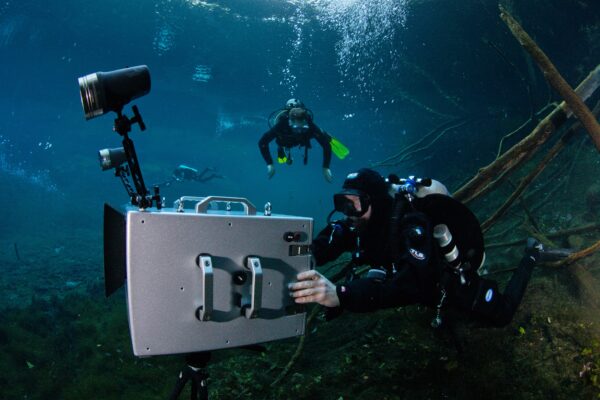 Peter Baaten produced the shoot: “The special underwater camera housing makes it possible, for the first time ever, to submerge a complete Stereo 3D camera system - composed of various modules - to depths of 80 metres.

“The system is completely independent of the land; all of the equipment fits in one compact aluminium housing. This paves the way for beautifully long and smooth underwater tracking shots.”

Mexico’s National Institute of Anthropology and History issues permissions for crews to film in cenotes that are known to be of specific archeological significance. Many of the cenotes are also on private land, which means negotiating fees with local landowners.

“It’s very rough terrain and some of the Yucatan cenotes are located in deep jungle that’s only passable with off-roaders,” Baaten adds: “It was a challenge to transport the equipment. We had three to five tanks each for up to six divers, as well as underwater scooters, safety, light, grip gear and so on. Even though the newly-designed camera is a light and compact system, its weight is 80 kilograms.”

Local accommodation options included nearby eco-hotels, but they all offered only sparing electricity usage and that would have been an inconvenience for battery charging. They ended up renting all seven rooms in a dive centre hotel in the town of Tulum on the east coast of the Peninsula.

Ortolf Karla produced the shoot for Golocine, based near Mexico City: “The divers had full and comfortable service for their gear. The hotel owner is one of the major explorers of the area and a first-class source for information on the cave systems.

“There are major car rental companies with all kinds of cars. We used two Toyota HiAce vehicles for the whole time at decent rates.”

The Caves of the Dead is scheduled to open in mid-2013.