A new audiovisual project has filmed on location in Polish salt mines near Krakow. Salt is a Polish-Norwegian co-production telling the fantastical tale of a girl growing up in a sandcastle as her parents crystallise into salt. 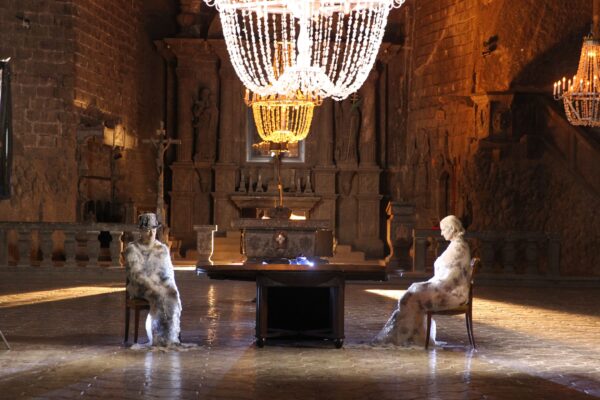 Combining live-action footage with animation, dance and even puppetry, filming took place in the Wieliczka Salt Mines in Poland. The filmmakers used the unique backgrounds as a visual metaphor in the film’s narrative.

“The salt mine in Poland has been a major source of inspiration in developing the design and the manuscript,” said director Maria Lloyd, who worked closely with Norwegian producer Ingvil Giske: “The mystery of salt crystals fascinated me for years. We are using the crystallisation process as a metaphor for the internal emotional states which happens in the family structure. The visual style is taking its inspiration from old hand-coloured films and photographs.”

As the mines are a tourist attraction the production was restricted to shooting after 7pm each evening. The mine didn’t place restrictions on crew size, but 29 went down dressed in specialist mining gear and helmets, travelling to depths of a hundred metres with a team of trained miners.

Elevators are not too big - maximum eight people - and moving from one chamber to another takes a bit of time.

“Elevators are not too big - maximum eight people - and moving from one chamber to another takes a bit of time,” says line producer Marta Habior of No Sugar Films, “so the bigger the crew and the more equipment there is, the more time it takes to actually get to the location and start setting up a shot."

She adds: “We did one extra day before just to get all the equipment and props down and distributed to different stockrooms near each chamber. Sometime we'd need an extra crew of electricians and miners for moving the equipment around in order not to lose time."

Mains electricity was available in most of the spaces where they filmed, but radio communication didn’t work between individual mine chambers. There was also no way of contacting their surface team except in an emergency.

“It's very challenging logistically,” Habior adds, “but that also keeps the production in order. It requires lots of experience and pre-visualising in prep to ensure the shoot goes smoothly. The Wieliczka administration was very helpful and professional through the entire process of preparation and miners were always ensuring we were safe.”

Salt was produced by Mediaoperatørene and Aurora Film in Norway, and Plesnar & Krauss Films in Poland. It’s scheduled to be screened in Norway and Finland in late 2013.