Tokyo-based TFC Films shot on location in Spain’s Tabernas Desert for a new Western-themed commercial for Fuji Xerox. In Big Picture a local artist paints a scenic landscape on the wall of an isolated town in the Old West to help camouflage it from local bandits. 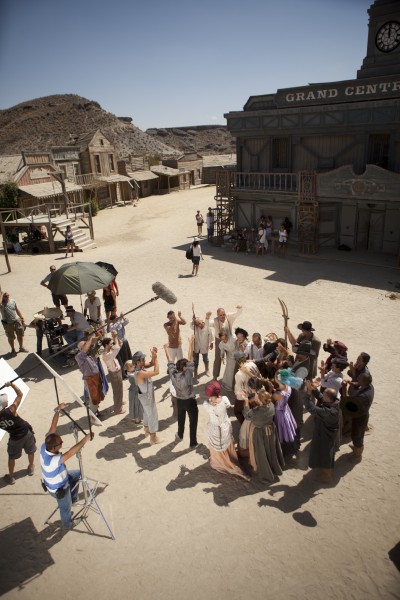 TFC Films picked Fort Bravo in the Tabernas Desert region of Almeria, Spain, to stand in for the spot’s Old West setting. The region was made famous by the Spaghetti Western movies from the 1960s and Fort Bravo is now one of a collection of Western-style theme parks.

“They do Western shows too so the fort could help with wardrobe,” says Marc Bedia, Executive Producer with servicing company Story: We Produce: “although we ended up bringing some of our own set dressings. It’s easier to film during the week because families come down at the weekends for the Western theme park shows and the theatrical shoot-outs.”

Setting up the painted wall for the final shots was a different challenge. The production team hired a street artist who needed several weeks to complete the ocean scene. He worked in a large warehouse and then the wooden surface was dismantled and taken to the filming location.

Shooting for the final pay-off – where the bandits see the beach painting and mistake it for a real coastline – was filmed near but not at Fort Bravo. When the camera rises above the painting, digital trickery was used to recreate the town hidden behind.

It’s easier to film during the week because families come down at the weekends for the theatrical shoot-outs.

“Some of the Western towns in the region don’t look so good anymore,” Bedia conludes, “but Fort Bravo still looks the part and has some good sets.”