Steve Mortimore convinced Glasgow to host a zombie apocalypse and also secured a Navy ship for Brad Pitt’s upcoming World War Z. He talks to TLG about planning the end of the world and finding studio space for one of the biggest movies ever made.

I meet Steve in a bustling coffee shop in north-west London’s Primrose Hill. It’s a sedate setting for a chat about the zombies and aliens that have been a large part of his day-job. It’s been two years – almost to the day – since he first started work on Marc Forster’s World War Z, which is now set to become one of the big event movies of 2013.

Loosely based on the novel of the same name by Max Brooks, the film follows Brad Pitt’s UN worker as he races to stop a zombie plague from becoming a global pandemic that could threaten humanity’s existence. The story’s settings zip between key international locations including Philadelphia, Israel and the American aircraft carrier the USS Harry S Truman. Mortimore immediately had a challenge on his hands as none of these were practical filming locations. 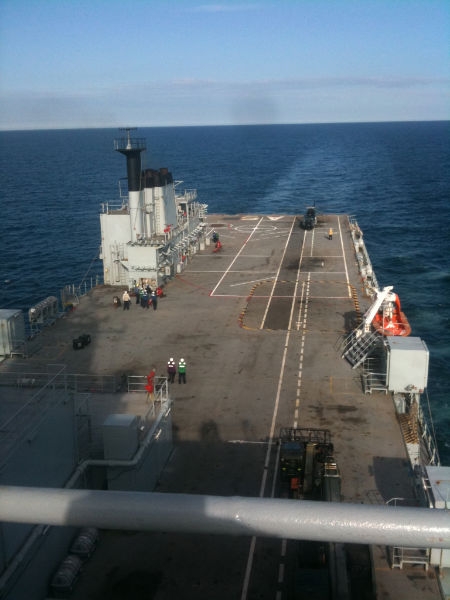 Instead, Malta was confirmed early on as a double for Israel. A less “sensitive” part of the world, Malta was an easy choice given that it looked the part and offered a filming incentive along with world-class infrastructure. Unit Location Manager and regional specialist Christian McWilliams took on the task locally as Mortimore turned his attention to the aircraft carrier setting.

“The Harry S Truman is just enormous,” Mortimore explains: “We were going to build the deck at an airport and we ended up at Bovingdon Airfield in Hertfordshire. There was a lot of planning work involved – about three months altogether led by my Unit Location Manager Asha Sharma – as we planned to turn this airfield into the deck of the Truman, as well as Moscow’s Red Square, a Philadelphia bridge and Newark tower blocks.”

Before actual construction began at Bovingdon, Forster decided he wanted to film on a real aircraft carrier. It was an unexpected decision and became a meaty challenge for Mortimore and his team as they left Bovingdon. The Royal Navy’s light aircraft carrier and former flagship HMS Ark Royal was the first choice but despite “fantastic” help from the Navy, the ship was undergoing extensive decommissioning and couldn’t be made available in time. World events were to further hamper the search.

“At the time the UK was at war with Libya,” Mortimore recalls, “so there were very few ships that we could even consider. One in Greece was being scrapped and another in Edinburgh was on combat-readiness.”

At the time the UK was at war with Libya so there were very few ships that we could even consider. One in Greece was being scrapped and another in Edinburgh was on combat-readiness.

He eventually found the Royal Fleet Auxiliary Argus, a helicopter ship. It had already served in Libya and was on the way to a maintenance stop at Falmouth on the English south coast. With the help of Andy Buckley, a contact who was leaving the Royal Marines and acting as a production link with the Navy, Mortimore arranged a formal presentation of the production’s intentions for the Navy in Gibraltar. Two weeks later they got permission for a Falmouth shoot.

While the ship was confirmed, setting up hundreds of crew members for the shoot proved an unexpected challenge as their visit coincided with Falmouth Week, an annual yachting regatta. 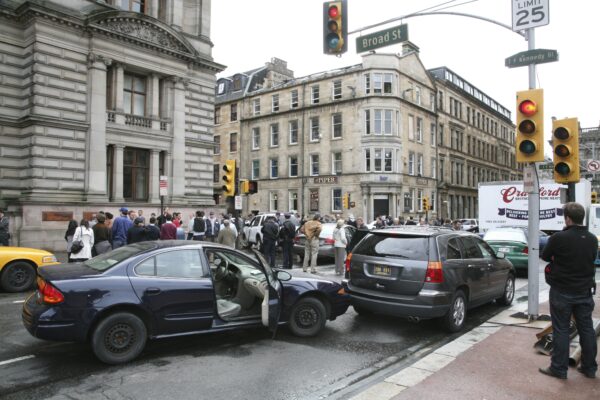 “There was no hotel accommodation because of Falmouth Week!” Mortimore exclaims: “I had someone stationed in Falmouth going into every hotel and booking however many rooms were available. We were getting one, two or three rooms at a time, spread out over the city for a crew of about 800 people. We had to fan out to Plymouth in the end because there weren’t any other options.”

With the Argus scenes in the can the production shifted to Glasgow, where the Scottish city’s distinct grid street system made it a convincing double for a zombie-besieged Philadelphia (above). Mortimore met with Glasgow Film Commissioner Jennifer Reynolds – “she was amazing and completely onboard” – and after extensive conversations with local businesses they got the city centre shut down for the 18 consecutive days they needed.

The production team spent five days prepping the streets in stages with Location Manager Michael Harm running the operation on the ground. Preparations involved bringing in a structural engineer to help erect the support posts needed for high, cable-operated cameras. Several vacant floors of a nearby office building were used for the long process of applying zombie make-up to a horde of extras.

“Usually, a shoot like that in a city would be done at the weekend after six months’ prep,” Mortimore considers: “But to do 18 days in a row – I don’t think any film’s ever done that! We had to close one whole street just to park 45 tech vehicles!”

Usually, a shoot like that in a city would be done at the weekend after six months’ prep. But to do 18 days in a row – I don’t think any film’s ever done that! We had to close one whole street just to park 45 tech vehicles!

Mortimore had in fact been finalising an eight-day shoot around London’s Canary Wharf for the Philadelphia scenes. This only changed when the shooting schedule for the movie’s urban terror sequences was suddenly doubled in length, which was something the Square Mile couldn’t accommodate.

The zombies ended up heading north of the border, but Mortimore has worked extensively in and around London over the course of his career. Working on the production of Disney’s science-fiction behemoth John Carter in 2010, he was asked to find an alternate filming space near the capital when there were no available studios. Feeling the pressure of securing an eight-month shoot for the UK that was on the verge of relocating back to America, Mortimore finally found an immense former distribution warehouse in Greenford, west London.

He marvels: “The space I found at Greenford was eventually 225,000 square feet and 65 feet high, which is twice the size of the 007 stage at Pinewood.

“There weren’t any major alterations to the building itself. It didn’t really need to be soundproofed because it wasn’t near anything particularly loud. If it rained during the shoot – which it didn’t – we would have had a slight issue. But as with all major productions there was money in the budget for Additional Dialogue Recording.”

An eight-month lease was secured on ‘Disney Greenford Studio’ and 600 lights were installed hooked up to a pair of articulated generators – “The building had power, but for insurance purposes you couldn’t rely on it” – to illuminate a massive interior set build. Filming in the winter months then became a careful balancing act, managing the interior heat against the physical weight of snowfall on a roof that wasn’t designed as a studio facility. When the shoot wrapped, ownership of the property was signed off to a supermarket chain, abruptly ending the building’s studio existence.

Mortimore loves a challenge and the time spent working on some of the less glamorous facets of location management certainly don’t discourage him from the job. He recalls that he personally clocked up 78 separate flights during his work on World War Z and an initial location recce for the Glasgow shoot needed a full day in the office setting up around 80 flights to get all the relevant people to Scotland. Tasks like these may lack the excitement of being on location, but he clearly relishes the fact that no two days are the same.

“When I get on that plane with the script, it’s just the best feeling,” Mortimore concludes: “Especially if I’m going to a new country. It’s really an amazing job; there’s nothing I’d rather do.”

All stills courtesy of Steve Mortimore.