Stephen Poliakoff’s miniseries Dancing on the Edge filmed on location across London and West Midlands. Location Manager Harriet Lawrence talks to TLG about the practical challenges of shooting the tale of a young journalist promoting a black jazz band in the early 1930s.

“Finding locations for Stephen Poliakoff is a challenge,” Lawrence comments: “He always shoots one hundred percent on location and prefers locations that have never been shot before! I can’t always deliver the ‘never-been-shot-before’ ones, but locations are crucial to him - they are integral to his work.”

Finding locations for Stephen Poliakoff is a challenge. He always shoots one hundred percent on location and prefers locations that have never been shot before!

Filming for Dancing on the Edge began in north-west London in affluent Hampstead. Ten production trucks and vans had to be fitted down narrow streets barely wide enough for a horse-and-cart.

Their destination was Fenton House (below), which Lawrence describes as “rarely seen on-screen, difficult to service and exactly what Stephen wanted”. A former merchant’s house that dates back to the 17th Century, Fenton House is now a National Trust property. The production team had to be careful moving the cast and 120 crew members around collections of Georgian furniture and porcelain. 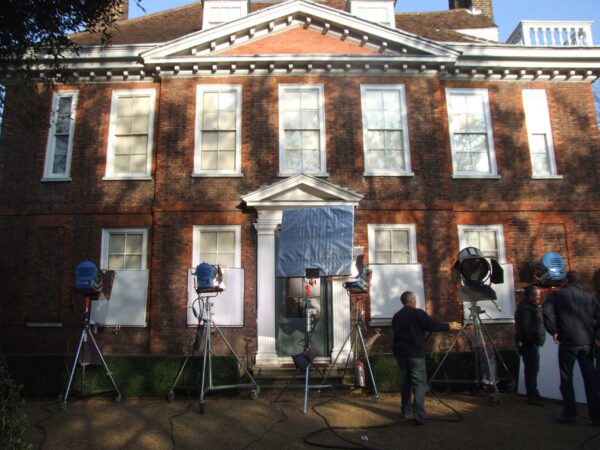 The National Trust and Fenton House staff were “fantastically helpful” and filming ended up coinciding with a period when the building itself was closed to the public.

“I had failed to get the 18k [light] the DP wanted on a nearby roof (Ridley Scott’s!),” Lawrence adds: “The trucks were 200 yards away. It was cold and so foggy we could barely see the other end of the gorgeous gardens and the lead actresses were dressed in flimsy 1930s evening dress and they had to sing; a challenging start to a 16-week shoot.”

Production soon shifted to West Midlands. After a stop at Ragley Hall near Alcester (read more here), the Grosvenor Suite (below) in the Grand Hotel in Birmingham became the ballroom of the story’s fictional Imperial Hotel. Closed since 2002, the Grand was in the midst of an extensive refurbishment with the Grosvenor Suite being the only part of the Grade II listed building that could be used as a filming location.

“We are delighted that the Grosvenor Suit was chosen for such an important series,” says Tony Green, Chief Executive of Hortons’ Estate: “It was a perfect choice and is as impressive on film now as it would have been to guests in its heyday.” 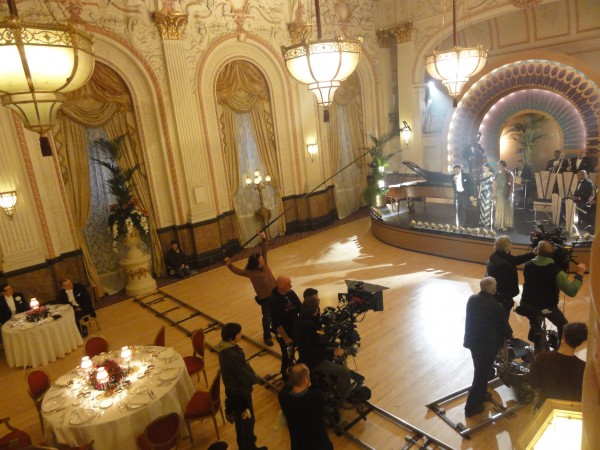 Lawrence and her team also found an ideal location at the Black Country Museum in Dudley. The museum is dedicated to the story of the region’s historic industrial development over the past 200 years and one of its resources is a small town set (below) that’s rarely filmed but has an aesthetic that can be dated from the Victorian era up to the 1930s. Lawrence saw an opportunity to film in a location that could be controlled and needed minimal changes, but Poliakoff was adamant he didn’t want to be in a museum setting.

“Initially Stephen was reluctant,” Lawrence admits, “but I knew we had a perfect location on our hands so went all-out to persuade him. There was so much potential and it was so controllable. We didn’t need to remove TV aerials, burglar alarms, change door furniture, clear cars, cover street markings [or] remove signs.”

Pushing the museum’s case worked and Poliakoff was “delighted” with the results to the extent that more scenes were filmed here than originally intended. By coincidence the museum had scheduled a very unusual ten-day closure during which the village set was available for use, while the large car park was useful as a unit base.

“I love the fact,” Lawrence concludes, “that when [Stephen] starts writing a new film, we meet and in the very early stages of the creative process I can suggest locations that excite him and find their way into the script early on. It is rare to work with a director in such a creative way and [it’s] a challenge that I relish.”

Dancing on the Edge is showing on BBC2 in the UK.