Written by Murray Ashton on Mar 19, 2013. Posted in Interviews

Mads moved to Greenland from Denmark with his wife six years ago, leaving behind an academic career and profession as a social anthropologist. He now works for Destination Arctic Circle, which is one of five regional Destination Management Organisations in Greenland. 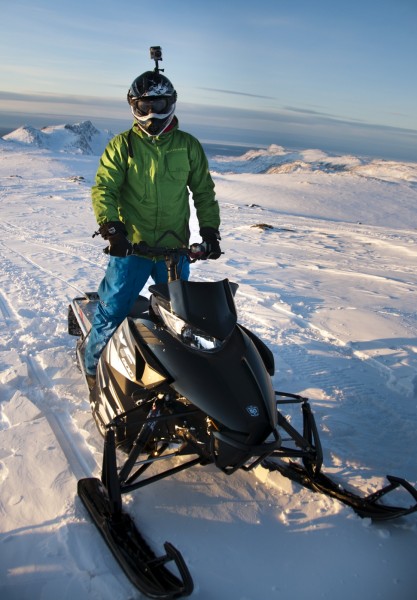 What part of Greenland do you cover and what can you tell me about it?

I cover Destination Arctic Circle on Greenland’s west coast, which I consider my home turf, but once we move beyond the borders of the region I don’t know much about how details would play out on the ground in a location context.

The region is about the size of Greece, with 10,000 people living in eight different places. The smallest settlement has 80 people and the largest town has a population of 5,600. We have direct access onto the ice cap, long fiords, rough coastal areas, 2,000-metre-high peaks, seven months of winter, no roads between communities and an abundance of musk oxen and reindeer.

What types of productions do you prefer working on and why?

I prefer working on small-scale productions in the outdoors and preferably deep in the backcountry. This way I can travel with the film crew and the group is small enough for us to fit around a campfire or in a small boat.

What productions have you most enjoyed working on over the years and why?

In 2011 and again in 2012 we produced a series of two- to four-minute storytelling and branding clips for Destination Arctic Circle in collaboration with the impeccable Humbi Entress from MMP Films. These two six-episode series only happened because Humbi is a creative genius, and because local tour providers, hotels, charter boat companies and even the national airline all chipped in and spent time and resources on converting the plans to an end product.

Stuff like that brings the key players in the regional industry closer together and it helps shape their sense of a shared place. That is very important for our ability to tell a strong branding story.

What has been your most challenging location assignment?

In March 2011 we planned, organised and shot the third episode in a national five-part food and travel series called A Taste of Greenland. For some reason we decided that winter was a great time to film in our region. Obviously all the sun, snow and ice is super beautiful, but trying to keep things together, dragging gear, cooking and running a cell phone so the home office can reach you, is really not that easy when you’re up on the ice cap and it’s -38 Degrees Celsius. Fun, but not always funny!

The region is about the size of Greece, with 10,000 people living in eight different places. The smallest settlement has 80 people and the largest town has a population of 5,600.

What advice can you offer about filming in your region?

Always (seriously, always!) involve someone on the ground very early in your planning stages. It does not necessarily have to be someone like me, but at least someone with strong local knowledge who knows all the quirks because filming in Greenland is one long string of exceptions to the rule. The only ground rule here is to plan with plenty of buffer – oh, and it doesn’t hurt to have someone like MacGyver on the team as well.

Are there any specific film-friendly locations and production service companies you can recommend?

If I can only pick one location then I’ll go for Kangerlussuaq, a settlement of 550 people where the international airport is located. It has easy access to wildlife, a dirt road right up to the ice cap, fiords and mountains, and there is plenty of sunshine or northern lights, depending on the season you’re working in.

The diversity of landscapes makes this a really great place to work and World of Greenland Arctic Circle - one of the region’s strongest tour providers - is based here and they have lots of experience with film crews.

I usually go boating and fishing in one of the fiords with my family if it is summer and in winter I spend a lot of time snowmobiling, which is where I am most at peace.

To me, location management is all about collaboration and people management. The dynamics of bringing together domestic and foreign tour operators, athletes, film crews, local champions, funding partners and a host of other stakeholders is just a lot of fun. Getting that mix of people to pull in the same direction is what drives me.

If you hadn’t become a Location Manager what would you have done instead?

I would probably ‘just’ have worked as a Destination Manager, hiring someone else do the location management. Because we work in an environment with very few people and resources you often have to take part in processes that span general project conceptualisation. This will involve working in the field, brewing coffee, production co-ordination, media management, content campaign execution and much more. I guess that’s why it is so much fun!