Television survival show Naked and Marooned with Ed Stafford left the eponymous adventurer on a remote uninhabited island in Fiji, where he fended for himself for 60 days and filmed his own exploits. TLG talks to line producer Steven Ballantyne about how the production was filmed.

Tigress Productions in London enlisted the help of Steven Ballantyne and his Hong Kong firm Expedition & Production Management (EPM) Asia to locate an island for Ed Stafford's experience. Stafford is a soldier-turned-adventurer who set a world record in 2010 for becoming the first person to walk the length of the Amazon River, an expedition that took 860 days.

“We spent about five months planning where to send Ed,” Ballantyne recalls: “My initial brief from Tigress was quite straightforward - the island had to be remote, uninhabited and have a natural food and water source.”

Ballantyne at first came up with a list of 25 islands around the world that were suitable for the shoot. Tigress then gave him an extensively updated set of specific location requirements, including having another island near where Stafford was marooned, where a support team would be based in case of emergencies.

An island in Fiji offered the right combination of physical elements for Stafford’s experience, although Ballantyne found the support island first through a chance meeting with the son of a village chief. Aerial scouting from a small local airstrip helped him take a closer look at the neighbouring island where Stafford would be stranded.

Stafford was completely alone throughout the shoot. While the island was certainly remote – access from the mainland was via a chartered light aircraft, an hour of driving and three hours on two separate boats – Ballantyne arranged a maritime exclusion zone to ensure he wasn’t disturbed over the 60 days. The zone extended 8.5 nautical miles from the beach and was agreed with the regional maritime authority to make sure no vessels would approach.

Twice a week I visited a pre-arranged drop point on Ed’s island where he left his digital footage for collection ... We had pre-planned the drop-off and collection times to make sure we never met on the island.

“Twice a week I visited a pre-arranged drop point on Ed’s island where he left his digital footage for collection, as well as urine and stool samples so that we could monitor his health,” Ballantyne continues: “We had pre-planned the drop-off and collection times to make sure we never met on the island.”

Stafford transmitted a simple non-verbal electronic signal twice a day to announce he was still in one piece. As a one-man production support team, Ballantyne had First-Response medical training, a boat on 24-hour standby to make the 40-minute trip to Stafford’s island and an air rescue plan in case the adventurer ever sent an emergency code. 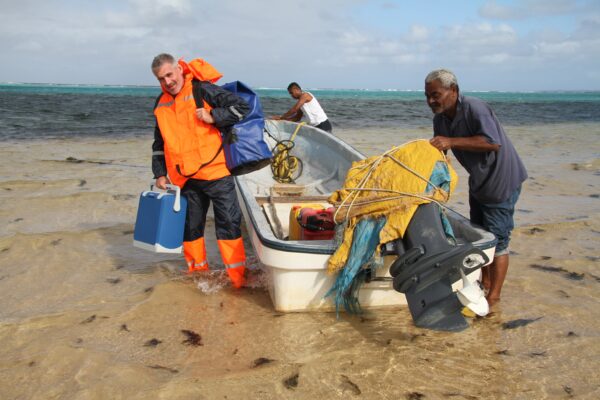 Ballantyne lived on the neighbouring island in a corrugated-iron house in the local village, his electronics powered by a small oil generator and self-installed solar panels. Maintaining battery power stocks and safely downloading Stafford's footage was a full-time job and in his spare time Ballantyne worked on an education project in the village school that was sponsored by both Tigress Productions and EPM Asia Ltd.

“Because of the structure of the tribe I was living with, we made an equal financial arrangement with the villagers to support the production,” Ballantyne says: “The village was made up of four separate clans who were all under the one chief. It was a very traditional tribal set up.

Ballantyne already had considerable experience of negotiating with tribes and he carefully researched how to approach this Fijian community. A fair rota system was used to pay cash to individual clans for specific services. A community fund was also established for the island rental and EPM supported the opening of a community bank account that could only be accessed with the signatures of all four clan leaders.

"This was a fantastic production to work on with Tigress Productions," Ballantyne concludes: "From initially locating and negotiating the use of the island and managing the complex logistics and ensuring this production could be managed remotely and safely over a 60-day filming period, to being on call 24/7 as line producer on location for the entire production period."

To find out more about filming in Fiji click here.