New big-budget science-fiction TV drama Defiance filmed on location in Ontario, doubling it for the American mid-West. Set 40 years in the future, the story focuses on a lawman running a dystopian St Louis – renamed 'Defiance' – against a backdrop of alien invasion.

Australian filming locations were initially considered for the USD40 million series, but costs – a long-term issue in Australia – were not ideal.

“We looked at Melbourne, Australia, very closely in the beginning, wanting to capture their unique alien-like landscapes in the Outback,” recalls Universal Cable Productions (UCP) Vice President of Production Randi Richmond: “In the end, costs and time zone concerns eliminated Australia. Because Defiance is a very complex and ambitious endeavor, we wanted to make sure that production not be too far away from the producers and UCP and Syfy creative executives.”

A gravel quarry outside the town of Uxbridge near Toronto was eventually chosen. The location appealed to UCP because a couple of their existing shows were already based in the area and they had tighter controls over production costs and local infrastructure.

Our biggest challenge was creating the alien looks that could be done quickly for an accelerated TV schedule.

Village and mine sets were built in the quarry, as well as extensive roadways. The alien vistas, on the other hand, while plentiful in Australia, were less abundant in Ontario so the trade-off became the more extensive use of visual effects.

“Our biggest challenge,” Richmond adds, “was creating the alien looks that could be done quickly for an accelerated TV schedule and with the quality and quantity for incorporating large crowd scenes on a basic cable budget.” 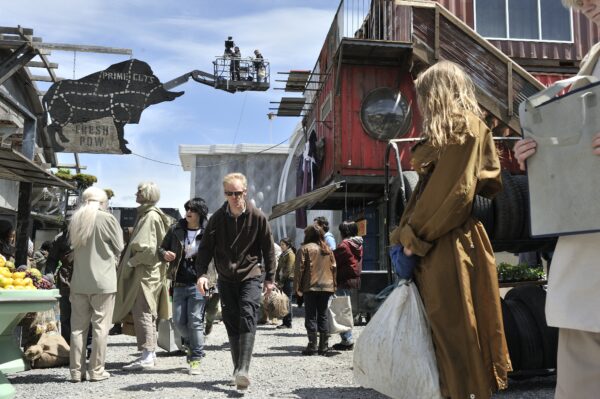 “During prep the biggest issue was getting Ministry of Natural Resources permission to use the gravel quarry for long-term filming,” comments Ontario Film Commissioner Donna Zuchlinski: “There are environmental laws pertaining to returning these lands to their ‘original condition’ once they are no longer operating quarries.”

The show has been developed in tandem with a Defiance videogame, which will be released ahead of the TV series’ launch. Atlantic Pictures produced a live-action trailer for the game, which was filmed on location in Texas, doubling for California. Find out more about the shoot here.

The Defiance videogame launches in the US on 2 April 2013 and the TV show debuts two weeks later on 15 April.